I have been in contact with a woman named Gen, who has agreed to let me post this letter she received from Mike Lawyer, “on behalf of Christ Church Session.” Christ Church is Doug Wilson’s church in Moscow, Idaho. If you would like to learn more about Doug Wilson and his extra-biblical and spiritually abusive ways, see his name in “Categories” in the side bar.

Gen told me she was in an abusive marriage. She was not physically abused, but was emotionally, verbally, spiritually, and financially abused. She and her husband sought counseling, and were in counseling both together and separately.

Gen also told me that she didn’t respond appropriately to the abuse – that she reacted by yelling and crying. I don’t think that’s an inappropriate response to abuse, do you? That seems very normal. I’m not sure where she learned that she was responsible for her response, but that concerns me because it takes the focus off the perpetrator and places it on the survivor – as if they are both equal sinners.

This following letter was sent to Gen on January 18, 2018. Mike Lawyer has decided he knows her spiritual condition and has determined that she is not living up to being a proper wife, etc. Because of her “unwillingness” to deal with her sins, she is being put in church discipline.

According to Mr. Lawyer’s Facebook page, he works at Christ Church as well as Center for Biblical Counseling (aka Nouthetic counseling). He is also an instructor at New Saint Andrews school in Moscow. Basically, his life seems to be very connected with Christ Church and Doug Wilson.

Here is an image of the letter Gen received: 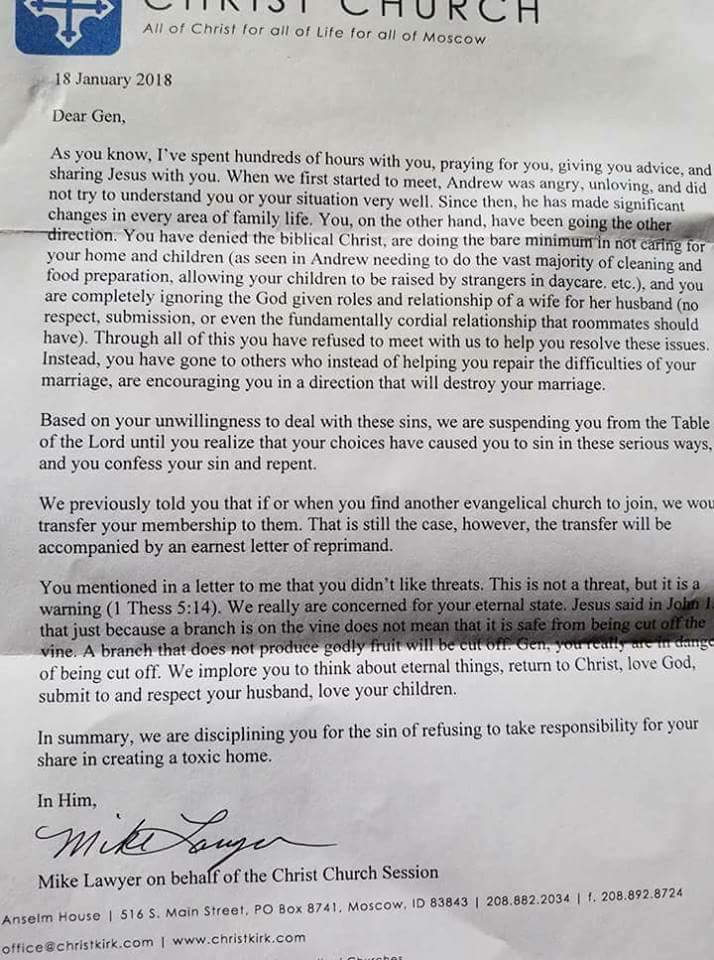 Initially, this letter was shared without consent from a secret Facebook group with out permission. This was not a local group. I’ve since given permission , selectively, to be shared while protecting my identity. Here are some important clarifications: I love my husband and he is not violent. I am safe as are my children. I want to seek outside counseling to work on marital issues.

I appreciate the concern from the Christ Church community, but I revoked my membership in October.

I do feel this is an over reach of the church but I’m thankful for the time I’ve spent there and hope to keep friendships despite differences.

This is a breaking story and we will add more details when they become available.

***New update January 26, 2018:  XianJaneway left a comment about church membership in the comments below. Here is the part of the comment that I want to address:

XianJaneway said: I spoke w/ a former Christ Church member who said that ONLY a man can revoke the membership, not the woman. It’s highly unlikely that Gen wrote this note. 😦 I’m really worried about her.

Today, I asked Gen specifically about Xian Janeway’s comment. This was her response:

They denied it [revoking her membership]. They didn’t say because I’m a woman. They said I’m a doubting Christian.

So, I asked Gen specifically if she believes in the essential doctrines of the Christian faith (Jesus paid for our sins by dying on the cross, He rose again, etc.).  This was her response:

Yes, I do believe that.

She did admit the following:

I am questioning the interpretations, theology, ideologies, and applications of my faith, in my life.

Ok, that is not the same as doubting your faith or rejecting the essentials of the Christian faith. That is simply asking questions about secondary doctrinal issues. And in light of the fact that Gen has been at Christ Church which has Patriarchal teachings, and who knows what else, doesn’t it seem normal that she would be questioning these issues?

Yet in the letter, Mike Lawyer claims she has “denied the biblical Christ.” That is a LIE. This is inappropriate. And it is spiritual abuse. I am disgusted by the way they have treated Gen.

Gen, stay strong. We believe you. We support you!

Gen also wanted me to relay that she works full-time and has 5 children in the home, including one high-functioning child with autism.