A note of introduction from Julie Anne:

Emily Jaeger is one of the sexual abuse survivors and plaintiffs in the Bill Gothard/IBLP sex abuse lawsuit. Her official statement about the lawsuit was posted on Spiritual Sounding Board a few days ago.

I initially said no, because I do not want my blog to be used as a platform for an abuser. However, then I saw Emily Jaeger’s new reply to Bill Gothard’s response statement, and it made sense to me to post both.

I may have more to say later — in fact, I am thinking of doing an SSB “learn to discern” post to analyze these statements in depth. But for now, I’ll say I think his statement is a perfect opportunity to see a spiritual abuser in action, violating boundaries, and hers shows what it looks like when someone leaves the influence of a high-control environment, thinks independently, and makes their own decisions. See what you think …

After reading your response to your lawyers dropping your lawsuit, I want you to know that you cannot say or do anything that will diminish my life-long commitment to serve you and your family in whatever ways I can. I believe that the best way I can serve you right now is to remind you of the real motives behind my attempts to help you.

According to your affidavit, you met me in 2006 at the Total Health Conference in Indianapolis, Indiana when you were 13 years old. You and your mother attended this conference because you were suffering from severe Crohn’s Disease.

You were also trying to “cope with the turmoil as a result of abuse” in your family.

Four years later, in 2010, I wrote the following entry in my journal: “I met Emily Jaeger. She was sitting in the hallway in tears. When I asked her what was wrong, she told me about her Crohn’s Disease and the medical complications from it. She also explained that she was having major conflicts with her father. I pointed out the need for her to get away stress because that is a major contributor to Crohn’s Disease. I also emphasized the need to resolve her conflicts with her father.”

Crohn’s Disease is no small matter. It is a life-threatening condition. In 2006, your parent’s requested a scholarship for the ATI program because of ”our 13-year-old daughter Emily’s ongoing illnesses…The doctors said it was the second severest case of Crohn’s Disease they had seen in five years”. The next year, 2007, they renewed their request for a scholarship stating, “the reason for our continual financial duress is our daughter Emily’s physical battle with Crohn’s disease…we have costs that have averaged $2,400.00 per month…last year we paid over $28,000.00 worth of medical expenses not covered by insurance.”

Each year I would see you and your mother at the Regional Conference in Indianapolis, and each year you would report the same problems. Finally, in 2011, when you were 18 years old, I offered to call your father to see if we could work out a plan that would resolve your stress and rebuild your relationship with him. Based on that phone call, you and your mother visited the headquarters for ten days.

During that time, I met with you and your mother, contacted two health professionals who had success with Crohn’s Disease, and bought and paid $1,000.00 for products that would boost your immune system. Once again, I called your father and discussed the need for you to resolve your stress and restore your relationship him.

At the end of that ten days your mother wrote,

Thank you, indeed, for sharing God’s love with us for the week we were at IBLP Headquarters. Your sensitivity to our needs and time from your busy schedule to talk with us is greatly appreciated. It is by God’s grace and the influence of your teaching in the Seminars since 1973 for me have been what has kept us together thus far.

Can you imagine the shock I experienced when you posted your negative account of our contacts under the headline of “sexual harassment”? None of the above factors were included in your story. I brought this to your attention in a phone conference with you and your mother. You both agreed that the article gave the wrong impression and asked the website to remove it.

On May 28, 2012, your mother wrote the following email to the RG website explaining why she and you wanted your story removed:

“First of all, neither Emily nor I ever felt like she was being sexual harassed in any instance. The fact that her post was made under the original article about sexual harassment gives people the impression.”

Then you wrote an additional letter to me stating,

“I want to apologize again for ever posting on RG. I will always regret it. Now that I understand a little more about RG, I am deeply disappointed in what they are doing.”

With all of this as background, can you imagine my greater shock when you became one of the Plaintiffs in the lawsuit that has the goal of destroying me and the entire seminar ministry? My first concern was how this was going to affect your health. I continue to pray for you and your family and would be thrilled to hear from you.

Through Christ our Lord 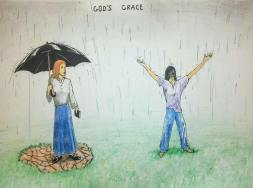 Once I learned to toss off that umbrella and allow myself to be soaked by the raindrops of God’s grace, I finally experienced the realness of a relationship that I’d been missing out on. And let me tell you, it’s a beautiful thing!

Discovering God’s grace isn’t about finding a license to sin; it’s about being humbled by the incredible realization and security that YOU ARE LOVED!  💗

* I happen to know a talented artist and asked him to draw this for me.

Here is Emily’s response to Bill Gothard’s public note to her.***

I find it interesting that you have chosen now of all times to publish, what I consider, such a detailed, public attack of me, full of private details, when you know full well I am not allowed to defend myself.

I also find it interesting that you have put so much emphasis lately on the “defamatory statements” made against you. Yet, you have openly called me bitter, a vicious liar, and a conspirator aimed at destroying your ministry, among other things. Some of your supporters have even created an entire website against me and my fellow plaintiffs. They just posted a nearly 4,000 word piece filled with very private information and blatantly defamatory remarks toward all us woman.

I promised myself a long time ago I would never address you in this format. However, since I was not given the chance to tell you the following three things in court, as I had anticipated, I will address you here.

1. You remember that letter I wrote to you two years ago that was turned over in discovery? Remember the last page? I forgave you.

Not only for all the years growing up in IBLP, but also for the last two years of the lawsuit and for this “letter”. But remember, I also said, “Forgiveness is not forgetting certain actions of people toward you. It’s not staying silent. It’s not excusing certain behaviors. Forgiveness is taking the burden of the pain, anger, and bitterness off your own shoulders and giving it to Jesus.”

And so, Bill, I want you to know I have already released everything and turned it over to Jesus. I can honestly say I have no feelings of hate or bitterness toward you.

2. Honestly Bill, over the last several years you have taken up FAR too much of my time, thoughts, and emotional energy. I truly have no more interest in speaking out against you publicly. I have already said my peace. I am ready to move on with my life and joyously dance in the light of my new found freedom in Christ!

3. I have changed, Bill. I’m so thankful I am no longer that scared little girl you knew back in 2012, the time these emails were written to you. As the song says, “I am no longer a slave to fear — I am a child of God.”

I have learned a lot.

I have learned I have an incredible Father who LOVES me — unconditionally!!  His love isn’t BASED off me, it’s PLACED ON me. My God’s love is not poured out because of the worthiness of the object of His love, but because of the abundance of His character AS LOVE.

I have learned about His radical, scandalous grace!  I can come to my Father anytime, with any pain. He is always there, offering comfort and security. And when I am too weak to walk?  My Father scoops me up and carries me.

I have learned that there is nothing I can do to make my Father love me any more or any less. You see, Bill, I am enough. Not because of anything I do. Not for following the Commands of Christ or the 7 Basic Principles. Not for memorizing scripture. Not for meditating day and night. I am enough SOLELY because JESUS IS ENOUGH!

THIS is freedom. And it’s amazingly beautiful.

Bill, I earnestly pray for you that you may be able to experience this freedom someday. To be able to learn the true meaning of grace and mercy. To see just how incredibly forgiving our God is. To walk in the freedom of grace and be able to depend on JESUS’S righteousness instead of your own.

To quote your favorite hymn: THAT just might make the pain “Worth it all” someday.

**Note: I was reminded that it was originally Bill Gothard’s suggestion to post his note to Emily here at Spiritual Sounding Board. I declined and it was posted at the Discovering Grace site. I have updated the post to reflect this. -Julie Anne 3/1/18 3:39 PM Pacific