Does Tony Miano’s ministry show kindness, genuine love, truthful speech and honor, or is he heralding slander instead of God’s Holy Word?

We put no obstacle in anyone’s way, so that no fault may be found with our ministry, but as servants of God we commend ourselves in every way: by great endurance, in afflictions, hardships, calamities, beatings, imprisonments, riots, labors, sleepless nights, hunger; by purity, knowledge, patience, kindness, the Holy Spirit, genuine love;  by truthful speech, and the power of God; with the weapons of righteousness for the right hand and for the left; through honor and dishonor, through slander and praise.

Tony Miano can probably relate with a lot of the above verses.  He is now awaiting trial in Scotland for his recent arrest while he was open air preaching there. He is facing possible imprisonment, perhaps sleepless nights. He clearly knows what scripture says about the challenges, potential harm and persecution that may befall him as he evangelizes, especially on foreign soil. But as an evangelist, he also has a responsibility as he heralds God’s Word and represents Christ. Miano not only stands on a platform when he open air preaches, he has a platform in the form of a broadcast that he does at Cross Encounters Radio.

Last weekend, Miano advertised that his show was going to discuss discernment bloggers. Here was a tweet from Saturday advertising Sunday’s show:

In the image below, the top tweet was published while the show was on the air and the two tweets beneath were sent after the show was over. 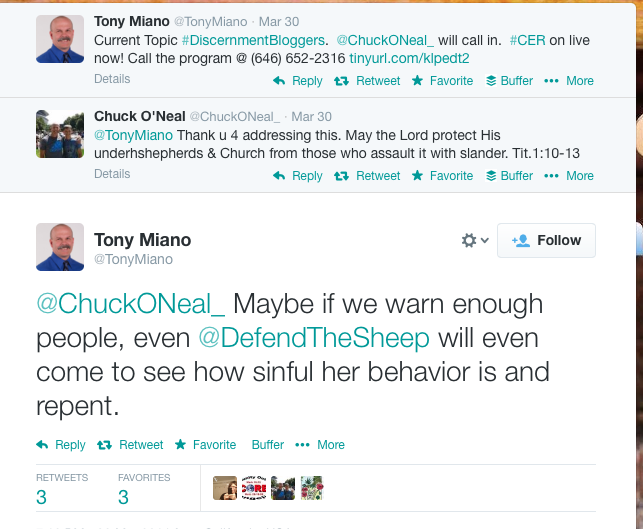 Here are some of the tweets posted since the show was broadcast. You can see that the discernment “bloggers” he takes issue with is really me, a single blogger. There was no other discernment blogger mentioned in any of his tweets that I have seen:

Chuck O’Neal of Beaverton Grace Bible Church, my former pastor who sued me and four others for defamation for $500,000, was interviewed for this show. It was difficult for me to listen to for a number of reasons. Anyone listening to the broadcast is essentially told that if you listen to me, JA, you are aiding and abetting Satan. You might just want to click that little x in the corner of your screen right now lest you find yourself in the fiery depths of hell along with me, the alleged Apostate.

A kind reader transcribed some words from Miano about me (remember, the show was advertised to be about discernment bloggers – plural):

Tony 47:18-  “I have personally gone to people who seem to be enamored with her and try to explain to them what she’s doing and have been ignored by them, or rebuked, or, uh, basically told don’t ever talk to me again, uh, because I’ve asked them to be more discerning about following this particular discernment blogger. So…she’s one of the worst of the worst. And it is only right since I have first hand knowledge of her activity, and don’t have to go by hearsay or innuendo, um, it’s only right that we should warn Christians to stay away from her. Uh, to not have anything to do with her, to not read her blog, to not friend her on twitter, don’t follow her on twitter. You are aiding and abetting the enemy.”

Tony 48:56-  “She is simply a vicious woman who is looking to attack somebody.”

Tony 53:04-  “She is an enemy of the bible. And so someone who makes it so obvious through their blog that they hate people and that they hate the truth of the word of God, these are the kind of discernment bloggers that should be avoided at all cost.“

Tony 69:14-  “No matter how clear the water may seem in other areas with Julie Anne Smith, there is a poison, a deadly poison in what she does that you should not even pick up the glass, let alone take a sip, of what Julie Anne Smith calls ministry.“

Tony 91:40-   It is the law and the gospel that will stop the mouth of people like Julie Anne, if God doesn’t give her over completely to her sin and so harden her heart like he did with Pharaoh, uh, that she’ll never be saved. Uh, she may be apostate, uh, at this time. She tasted uh, uh, of the things of God, the presence of the Holy Spirit, the, the communion of the saints, the teaching of the word of God and she has turned her back on it. Uh, even though she has not publicly said I denounce Jesus Christ, everything about what she does on-line shows a denouncement of Jesus Christ, and the word of God says that people like that, uh, never come back. But our hope is that she will. Our hope is that we will see Julie Anne in heaven one day.”

Ok, you get the idea of the whole broadcast. But this is what I found quite interesting:

It’s important to note that while Tony Miano’s show was about discernment bloggers and urging Christians to be careful about who they listen to or read, Miano himself failed to do due diligence and fact check.  Miano told his audience to be discerning. Let’s see how discerning he was.

Since the airing of show, Miano has tweeted quite a bit about me. I did not find the references about me to be accurate. I’d like to highlight just one example of an inaccuracy and allow you the opportunity to discern for yourself. We will start with this tweet in which Miano names me very clearly:

Ok, so that tweet reads that I liken John MacArthur and John Piper to Islamic clerics who condone wife-beating. The #CER refers to Miano’s Cross Encounters Radio show and then we see the link to the broadcast here.

Here is what Chuck O’Neal said on the broadcast from which Miano pulled the words for his tweet:

It appears that Miano did a good job of taking the words from O’Neal (he did have to truncate it a bit and leave off names due to Twitter’s character limitations), but Miano got O’Neal’s message well.

In the broadcast, Chuck O’Neal references his own personal blog post he published about me in which he cherry picks quotes, tweets, articles from my blog or on Twitter to paint me in a way that he wants to present to others. The problem is that Chuck O’Neal has repeatedly shown to have poor reading skills and because of that, he comes to wrong conclusions.

So where did O’Neal get the information for his blog post?  I remember the first time I read O’Neal’s words from his blog on this topic and it left me puzzled.  I’ve never written anything about John MacArthur connected with Islamic clerics, so I did a keyword search on my blog and found this article – the only article in which Islamic clerics are mentioned:   Are Christian Leaders Condoning Islam’s Rules for Wife Beating?? (Feel free to search for yourself in the right side bar.)

So here’s the part where I’d like you to be discerning.  You tell me:

Let me remind you of Miano’s words.  He says he has gone to people to warn them about me. He tells THEM to be discerning.  He says he doesn’t go by hearsay or innuendo.

“I have personally gone to people who seem to be enamored with her and try to explain to them what she’s doing and have been ignored by them, or rebuked, or, uh, basically told don’t ever talk to me again, uh, because I’ve asked them to be more discerning about following this particular discernment blogger. So…she’s one of the worst of the worst. And it is only right since I have first hand knowledge of her activity, and don’t have to go by hearsay or innuendo, um, it’s only right that we should warn Christians to stay away from her. Uh, to not have anything to do with her, to not read her blog, to not friend her on twitter, don’t follow her on twitter. You are aiding and abetting the enemy.”

117 thoughts on “Tony Miano’s Ministry of Honor, Genuine Love, and Righteousness by Truthful Speech? Or Not?”