Ok, I just got home and something is going down with Mefferd regarding the allegations of Mark  plagiarism by Mark Driscoll in several books.  Dee of Wartburg Watch tagged me in a tweet that Mefferd removed all of her tweets and blog material related to the Driscoll/plagiarism situation.  I also received an e-mail that Mefferd was going to be saying something about this on her show today.

I found the following tweets.  The top tweet is the most recent.  As I find more information, I will update. 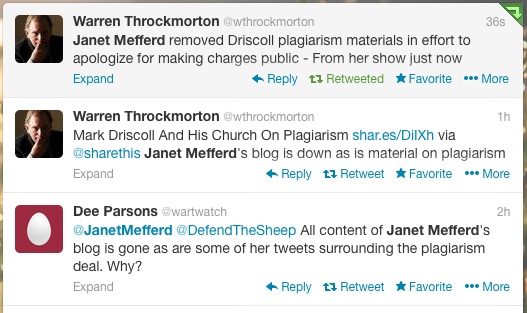 My gut response is that someone is forcing her to do this and that is not sitting right with me at all.

You can follow along with the latest here:   Janet Mefferd Removes Blog Posts and Tweets Related to Mark Driscoll’s Alleged Plagiarism.  *     *     *