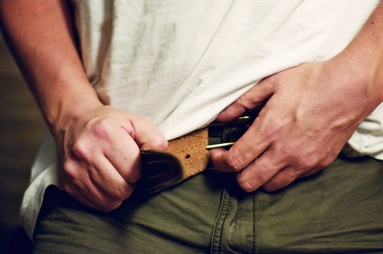 I am a survivor of Gothard’s cult. I experienced unspeakable physical, sexual, and emotional abuse from my mother and father, who were at one point among Gothard’s “model parents.” Gothard is not human. Gothard does not deserve compassion. Gothard is not a man, and he does not have the slightest shred of decency or humanity within him. Bill Gothard is a monster in human form, and as far as I am concerned, he can’t die soon enough.

In the comments, Dash was asked to share more, and did so with me privately. I have compiled them into this article (and at least one more article). Dash’s words were difficult for me to read, especially because of my own abusive childhood, but also because of many years of teachings I was subjected to as a parent, including Gothard’s materials, so I am going to issue trigger warnings for anyone who might be triggered by childhood abuse, by spiritual abuse, etc.

Dash Explains Why He is Telling His Story Now

I have chosen to share my story with you because I’m 44 years old and it’s time for me to start talking, to anyone who cares enough to listen. I’ve already lost more than half my time to Gothard, and I want my life back. He’s 80 years old and I believe he is still damaging people in alarming ways, and he is leaving behind a deeply rooted, vile and secretively violent institution that seems to be poised to grind forth in his absence and continue churning out his awful work upon the next generation. I want to put a stop to IBLP, and I want to end Gothard’s legacy as utterly as possible. Everything he has ever written, touched, or talked about is poisoned and poisonous, and it must be destroyed.

Specifically, I’d like to talk about those aspects of Gothard’s teachings which were protocols for physical abuse: examples include blanket training, beating children with rods, and the sheer exasperation of parents whose children failed the rules of the program which would result in explosions of rage and indiscriminate hitting. In particular, Gothard’s distortions of the following verse were extremely detrimental:

Proverbs 23:13- Withhold not correction from the child: for if thou beatest him with the rod, he shall not die.

Gothard devoted a great deal of written material, both IBLP and ATI, to using this verse as a premise for encouraging brutal beatings, albeit using roundabout phrasing and “soft” language which absolved him legally of any actual responsibility. At least, that’s how my parents interpreted it.

Part of my frustration in confronting Gothard stems from the fact that my family threw out a lot of Gothard’s most offensive ATI literature, some of which included blatantly racist arguments encouraging white followers to apply the “Quiverfull” practice, and to avoid miscegenation (in addition to the pamphlets encouraging beatings). So I can’t document a lot of these anecdotes. The basic literature quoting Proverbs 23:13, however, is part of the Red Book I believe; so it begins there.

Also, I would like to be very clear about this point: “spanking” was not what we experienced in my family. These were actual beatings, ranging anywhere from five minutes to an hour or more. The beatings were delivered to the buttocks, thighs, and lower back, and sometimes the hands, fingers, and forearms (defensive injuries), in response to any perceived slight, offense, or rules violation.

Depending on the severity of the of the punishment, anything from a wooden spoon to a 3/4″x2′ dowel rod was used. My parents actually had an array of dowel rods to choose from (at least a dozen) ranging from a thin one about 1/8″ thick to the 3/4″ terror previously described. Occasionally my dad would use his belt, a heavy leather belt with a weighty brass buckle. Not often, though, because the belt would leave visible bruises.

My sister and I would go to school with huge black and purple welts across our buttocks, carefully placed so that they were covered by our clothes, and we would sit at our desks in excruciating pain with tears streaming silently down our faces. This was during our initial participation in ATI, but before we enrolled full-bore in home-schooling.

My parents were very clear that these practices were part of our Gothard instruction.

On the few occasions when I met Gothard in person, he actually stated that he believed spanking made children healthier and more successful. He would then quote the proverb about beating. He was very good about mincing words in order to evade responsibility.

If you have questions at this point, it would help the dialogue. I’m happy to type everything I can think of, but I get so bogged-down and blinded with rage that it becomes difficult to think clearly. Answering questions is very focusing for me.

(JA note:  On the next post, I have asked Dash specific questions and he responds to those questions.

I’m not interested in confronting Gothard on Christian terms, in accordance with church protocols. He forfeited that privilege decades ago. I want worldly justice. I want a genuine reckoning from the man. I want to burn his entire legacy to the ground, and stand amid the ashes and say to the world, “This was a man who ruined thousands upon thousands of lives. Nothing to see here. Please move along.”

The greatest and most dangerous fallacy that I keep hearing from Gothard apologists is the argument “Gothard my be imperfect, but his teachings are still right.” No, no and no. This is a lie: an ugly, flat-out foul and evil lie, intended to continue perpetuating Gothard’s abusive legacy. Everything Gothard teaches is wrong, all of it, even his direct Scripture quotes, because the CONTEXT is wrong. It places Gothard in the seat of worship instead of Christ. Everything Gothard ever taught or ever will teach must be discarded. If people want answers, they should listen to the Holy Spirit, and not any human teacher.

The Dangerous Fallacies of Gothard Apologists

I’ve stated this in a previous email, but it bears repeating. The greatest and most dangerous fallacy that I hear from Gothard apologists is the argument “Gothard may be imperfect, but his teachings are still right.” This is blatantly false. Everything Gothard teaches is wrong, all of it, even his direct Scripture quotes, because the CONTEXT is wrong. It places Gothard in the seat of worship instead of Christ.

Everything Gothard ever taught or ever will teach must be discarded. If people want answers, they should read the Bible and listen to the Holy Spirit. They should not listen to Gothard or any other human teacher; they should make up their own minds.

he second greatest fallacy I hear from Gothard apologists is “Many families have a great experience in IBLP and ATI. If your family had a bad experience, it’s because you misinterpreted Gothard’s intentions.” This is also blatantly false. I believe Gothard does in fact intend for parents to beat their children. I would argue that anyone who claims to have had a good experience with Gothard, IBLP, or ATI is either lying, deluded, or sadists themselves. If you got 4-5 years into ATI and you actually applied everything in the publications that Gothard sent you, especially the material based on Proverbs 23:13, you would have had an identical experience to mine.

I believe that Gothard is a consummate con artist. In spite of the endless documentation of the damage he has done, Gothard still manages to convince his inner circle of friends that he is a good man with good intentions who merely stumbled a little bit, and his victims are more to blame than he is for making such a big deal out of “nothing.” There are two explanations for this phenomenon:

JA note: Alfred, who was mentioned above, is Alfred Corduan, who commented on this SSB post. You can also see his comments on articles at the Gothard survivor site, Recovering Grace website, where he continually defends Bill Gothard.

I would like to close at this time by saying that while I no longer call myself a Christian, I never gave up on Christ. I still believe in the Great Commandment:

I don’t do so well with the first part; loving God is next to impossible when I don’t know who God is, and I blame Gothard for that. I may yet end up in hell, and there’s nothing I can do about it. So I focus on the second part, and I try to love my fellow-man as best I can. That’s the best I can do. I can’t save myself. Only God can do that, if he wants to.