Thoughts about the Reformed Baptist bloggers known as the Pyromaniacs, a Pyro-Conference, and opining about the pain. At least third-degree burns don’t hurt. 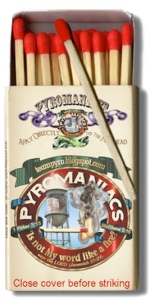 Long, long ago in internet time in a cyber place far, far away, a fellow started a blog. His name was Phil Johnson. I first heard of it through one of those evil egalitarian bloggers who first started out in apologetics ministry to Jehovah’s Witnesses. I ventured to her site one day to read her comments about what some esteem as the terrible sin of housewives and homeschoolers. Imagine! There are women out there who think that they can opine about Christian apologetics and matters of the Faith on the internet. Cheryl Schatz wrote the following description about the matter at Strive to Enter/Women in Ministry:

In this post and in his subsequent comments he makes his position plain that women are not allowed to publicly point out error of a “duly ordained pastor”.  Phil classifies many “housewives and homeschool moms” as bad discerners who are discernment divas.   These “divas” believe that God has called them into a ministry of discernment but their abilities are not in rational understanding of doctrinal truth but an ability “to use a really sharp tongue” which Phil says is counter productive and embarrassing.  Phil doesn’t seem to mind that this may offend a lot of women as he tells Friel that he is a descendent of the John Knox clan. It was John Knox who offended more than a few when he wrote the book The First Blast of the Trumpet Against the Monstrous Regiment of Women in 1558.

There isn’t much content in the actual post at the Pyromaniac’s blog where the material made its debut. The First Blast of the Trumpet Against the Monstrous Regiment of Discernment Divas does offer a video, and if you skip to about 25 minutes into it, you can hear the comment about the “Divas.” I ventured back to Phil Johnson’s blog a few times that next year, finding it all quite hyperbolic and shrill. Even on other topics, they sound snarky.  I’ve noted more than once where they essentially made up their own theological terms to sound erudite, but they seem to me to be rather silly.

Years later, it seems that Phil Johnson has retired from that blog, what he refers to as a “ministry.” He’s busy and very important. He’s the director of Grace to You, the name of Pastor John MacArthur’s media company. Now I’m beginning to understand why the Pyromaniacs blog sounds so shrill and features so much screed. If you do a search for his name here, you’ll note that he was once asked to weigh in on the legal matter between Julie Anne Smith and her former pastor, Chuck O’Neal. Another Pyro favorite post here on SSB includes one concerning Todd Friel, the guy who took the phone away from a woman who was sharing the gospel with a man – because men do it better. After all, the power is in the messenger, not the message or the truth.

If you’ve not able to get your fill of the sparks of wisdom from the Pyromaniacs, you can now look forward to a conference.

This fire will not be strange! This new conference offers pure fire and snark, directly from the Pyromaniac source itself. They’re going to be “Together Again, for the First Time.”   Sergius Martin-Georg of the Steam Tunnel Pilot blog (and SSB participant) has stated on Twitter that he will go if someone will pay his expenses. My friend Shirley Taylor in the Houston area could make it, but she won’t sit beside anyone who hasn’t signed her petition. (I doubt that anyone there will have signed her petition demanding an apology from Pyromaniac friends at the Council on Biblical Manhood and Womanhood.) They may borrow the Elephant Room Conference bouncers to make sure that the fire stays pure.

We don’t even know if they will let women into the event.

Who wants to go on behalf of Spiritual Sounding Board to live blog from the conference in January 2015? You may have to wear a fake beard and pants if they won’t allow women to attend.

Someone who I’m sure won’t be attending the conference discussing a subject that I’m certain will not be on the agenda is Kathryn Joyce discussing the activities of the GRACE Team – Godly Response to Abuse in the Christian Environment. The American Prospect just published a new article that she’s written with the cooperation of Boz Tchividjian about the rash of sex-abuse scandals that have cropped up recently in too many Christian Institutions. Boz might be welcome with the Pyromaniacs, though. He’s male and a Presbyterian.

Any masochistic volunteers out there who want to visit Houston next winter?

89 thoughts on “Anyone with a Burning Desire to Go to PyroCon?”