If you haven’t seen the movie, Spotlight, it is a must-see, and I will likely be posting some of my thoughts on the movie in the upcoming weeks after more people have a chance to see it.

However . . . . . I found it very interesting, no, make that disturbing, that the The Gospel Coalition has jumped on the Spotlight movie bandwagon in promoting the movie. I’m thrilled that they are promoting the movie, but I am also reminded of how they came alongside their friend, CJ Mahaney, then President of Sovereign Grace Ministries, who was embroiled in a huge sex abuse cover-up.  Hypocrisy much?

A few years ago, the case was exploding in the media and a number of TGC council members made public statements in support of CJ Mahaney (see links below). Mahaney was also still on the TGC speaking circuit as if there was no problem whatsoever. I have yet to see TGC leaders publicly speak out about the way Mahaney and Sovereign Grace Ministries mishandled the multitude of sex abuse cases which were covered up. These cases included an alleged sex ring, families told to not report the sex abuse crimes to authorities, etc.

While comparing evangelicals to Catholics on abuse response, ”I think we are worse,” he said at the Religion Newswriters Association conference, saying too many evangelicals had “sacrificed the souls” of young victims.

“Protestants can be very arrogant when pointing to Catholics,”  said Tchividjian, a grandson of evangelist Billy Graham and executive director of , which has investigated sex abuse allegations.

Here is a screen shot of The Gospel Coalition’s Facebook page:

(Let’s see how long my comment remains.  Feel free to add your own. If you do, take a screenshot. If they remove it, I will post it on the blog (and block out your name if you like).

UPDATE: Mine was removed within a half hour. I’ve posted Sarah’s comment below (you can see that mine is gone).

If you’d like a refresher of the sex abuse scandal, this is a good article:

Well, that was fast.  My comment was removed.  Here are more comments:

@DefendTheSheep @BozT Your comment is gone. Here's mine. pic.twitter.com/1yoJMGozjl

@TGC are hypocrites. CJ Maheny covered up sexual abuse at Sovereign Grace & you stand with him! @DefendTheSheep https://t.co/ESaiW62QhQ 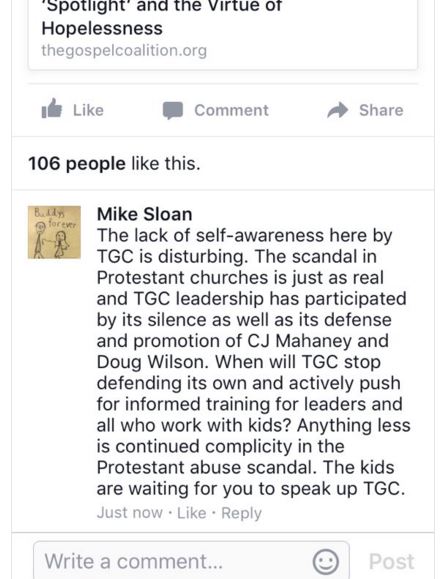