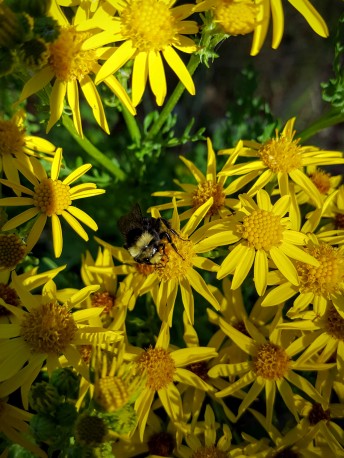 On a Sabbath Jesus was teaching in one of the synagogues, and a woman was there who had been crippled by a spirit for eighteen years. She was bent over and could not straighten up at all. When Jesus saw her, he called her forward and said to her, “Woman, you are set free from your infirmity.” Then he put his hands on her, and immediately she straightened up and praised God.

The Lord answered him, “You hypocrites! Doesn’t each of you on the Sabbath untie his ox or donkey from the stall and lead it out to give it water? Then should not this woman, a daughter of Abraham, whom Satan has kept bound for eighteen long years, be set free on the Sabbath day from what bound her?” When he said this, all his opponents were humiliated, but the people were delighted with all the wonderful things he was doing.

Then Jesus asked, “What is the kingdom of God like? What shall I compare it to? It is like a mustard seed which a man took and planted in his garden. It grew and became a tree, and the birds of the air perched in its branches.” Again he asked, “What shall I compare the kingdom of God to? It is like yeast that a woman took and mixed into a  large amount of flour until it worked all through the dough.”

Then Jesus went through the towns and villages, teaching as he made his way to Jerusalem. Someone asked him, “Lord, are only a few people going to be saved?”

He said to them, “Make every effort to enter through the narrow door, because many, I tell you, will try to enter and will not be able to. Once the owner of the house gets up and closes the door, you will stand outside knocking and pleading, ‘Sir, open the door for us.’

“There will be weeping there, and gnashing of teeth, when yous see Abraham, Isaac and Jacob and all the prophets in the kingdom of God, but you yourselves thrown out. People will come from east and west and north and south, and will take their places at the feast in the kingdom of God. Indeed there are those who are last who will be first, and first who will be last.”

Praise be to the God and Father of our Lord Jesus Christ! In his great mercy he has given us new birth into a living hope through the resurrection of Jesus Christ from the dead, and into an inheritance that can never perish, spoil or fade – kept in heaven for you, who through faith are shielded by God’s power until the coming of the salvation that is ready to be revealed in the last time.