It’s not always easy growing up in a Christian fundamentalist homeschool environment.  I have been seeing an increasing number of homeschool graduates “coming out” in more ways than one.  As a Christian homeschooling mom of over 20 years, we didn’t think about our own kids coming out sexually.  That just was not an option that was discussed in our fundamentalist circles.  A lifestyle other than heterosexual was not a consideration.  Well, it’s happening. Some former homeschool kids (HKs) are in fact coming out.  Some are doing it quietly, others are more bold and telling their stories publicly or online.  They are experiencing responses from their Christian fundamentalist parents, some not so positive. 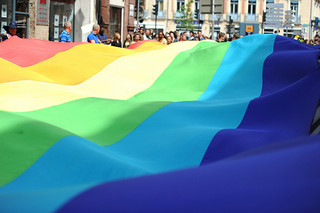 In light of those negative responses, one former HK has written an article in an effort to help Christians make that difficult connection with their LGBT adult kids: 7 Ways Christian homeschooling parents can support LGBT kids.

Some background for consideration: I am a homeschool graduate, now in college. I identify (right now) as queer and [transgender]. I no longer practice my parents’ religion, but I grew up in a conservative-evangelical Christian community. Certain aspects of that culture have not only made it difficult for me to understand and accept myself, but also deeply harmed my relationship with my parents.

I realize that Christian/homeschooling parents may not be eager to take parenting advice from someone like me, someone who turned out very differently than my own parents expected and hoped I would, but…my parents did their best to give me a Christian education. To raise me to serve Jesus. I became who I am anyway, in spite of their efforts to control my future. I hope that parents in this culture can try hard to listen to the stories my peers are bravely sharing, so they can learn healthier ways to love and parent their kids.

As a Christian homeschooling parent, I understand it would be a challenge to read those words. Out of our brood of seven, three are adult children.  We have seen our adult children make mistakes that sometimes make us cringe. This parenting thing is tough.  One adult daughter has spoken publicly about leaving her faith and walking away from her conservative Christian upbringing. Does this bother me?  You bet it does.  It’s difficult to see a child abandon the faith/morals/convictions we as parents tried to instill in our children.  Do her choices make us love her any less?  Of course not.  Is it difficult to maintain a relationship with someone so different from us?  Yes, it can be.

How do we bridge that gap?  In Theo’s article, he speaks directly to parents.  He is attempting to  give us insight into what will draw homeschool kids like him to us.  Don’t we want our children to be able to have a relationship and connect with us?   After our children become adults, that concept is not a given, it is a privilege.  I repeat – it is a privilege and a gift to have our adult children be a part of our lives.

Here are a few of the ways Theo mentioned that we can support LGBT adult children:

Those ideas seem reasonable, don’t they?  Actually, they would line up with Jesus’ basic command for Christians to love.  This seems almost too basic.  Parents should be able to handle these suggestions, shouldn’t we?

Well, sadly, this is not so obvious or important to others.  I was disappointed to read an article written by a homeschooling father who did not have kind words to say about Theo’s ideas. This article comes from Fred Butler.  Butler’s Hip and Thigh blog is rated #244 in Jared Moore’s yearly top 250 Christian blogs.   Here is Fred Butler’s bio:

My name is Butler.  I’m a graduate of Arkansas State University and The Master’s Seminary.  I currently live in the LA area and work at Grace to You, the radio ministry of John MacArthur, where  I have the honor of coordinating and directing the volunteer ministries.  My wife and I have five kids and we are all actively involved at Grace Community Church.

I began this blog in 2005 to have an outlet for my opinions both theological and secular.  I don’t have any particular emphasis with my blog except for promoting a high view of God, the authority of Scripture, and a biblically grounded worldview.

I have another website called Fred’s Bible Talk where you can listen to some of my devotional teaching I give to my volunteers and I have a secondary blog called Biblical Premillennialism.

Butler begins his article by saying he is responding to Theo’s article.   When reading the following quoted paragraph,  try to pretend you are Theo, an LGBT former homeschool kid who was raised in a fundamentalist Christian environment.  Tell me if you’re feeling the love from this Bible teacher and homeschooling parent.  Butler describes Theo’s article:

It’s one of those cathartic rants dripping with emotion that complains about how “my life has been ruined because I was homeschooled by crazy Fundamentalist parents.”  The Homeschool Apostates, I mean, Anonymous blog also cross-posted it at their place.  I thought I would use it as a spring board to offer a rebuttal and response to the author.

Look it. We all understand that you were raised in a wacky, Fundamentalist atmosphere. You’re ashamed and embarrassed about your past. Now that you have freed yourself from the shackles of your Fundy upbringing, you believe you have ascended to a fuller life. We get it, okay.

Apparently in an attempt to build a bridge between himself and the LGBT author, Butler then gives his religious background from childhood to adulthood, saying he started off in the United Methodist church and then in high school, moved to Arkansas where he attended a Baptist church.  All niceties come to an abrupt stop there.

Here is the new tone:

You seriously need to keep in mind that your so-called new found “faith journey” is just as warped and twisted as your parents[sic] Fundamentalism.

If I may, let me offer seven truths I think you need to seriously ponder. I warn you now that they will sting; but you need to read them.

Butler condescendingly shares with Theo seven truths of his own.  Here is a quick sampling:

You get the idea of the tone.  Did he say treat Christians with love and respect?  Ok.  Just checking.  Here’s more love and respect from Mr. Butler.  Oh wait, I forgot, Butler wasn’t talking about himself loving and respecting, but the LGBT kid.

You believe your shunning of your parents and their ways is sophisticated, so if they shun you in return, then the feeling is mutual.

Maybe Butler doesn’t realize that many of these fundamental homeschool parents actually shunned their adults children long before their kids shunned them.  How do I know?  I have read their stories online.

It is nothing new for adult children in their late teens and early twenties to separate from their parents physically, emotionally, and spiritually, and begin to question how they were raised, what they believe, and question what the future holds for them.  But I question the heart and attitude displayed by Butler, a current homeschooling father.  By the tone reflected in the article, it does not appear that Butler is really trying to build any relationship or reach anyone’s heart.  His attitude would probably push any homeschool kid further away.  We’ll know more in a few years, if/when perhaps some of Mr. Butler’s grown children eventually distance themselves from their dad.

But that doesn’t seem to matter to Butler.  As long as the truth is told, that’s love, right? Butler forgets that these adult kids already know the truth.  They have the scripts memorized. Remember, their parents taught them the way in which they should go spiritually.  This is nothing new to them.  They have all the verses still memorized from childhood.  The old scripts aren’t going to work for them anymore.

But then again . . . is Mr. Butler really interested in souls after all?  Maybe that list of seven truths is just all talk.  Why, you ask?

Check this out.  I can’t remember how I stumbled across this, a brief Twitter dialogue between Fred Butler (@Fred_Butler) and JD Hall (@PulpitAndPen).

In the first tweet at the top, there is the hyperlink to a website (bit.ly/109CVyu) that Butler refers to as needing a “snarky beatdown.”    The link takes you to a blog called Homeschoolers Anonymous – a blog community interested in “sharing our experiences growing up in the conservative, Christian homeschooling subculture.”

If you spend some time reading some of the former homeschool kids’ stories there, you will probably read some heart-wrenching personal accounts of abuse and neglect by Christian homeschool parents.  Many of the stories are not pretty.  Up until now, there was no specific gathering place for former HKs to share their experiences, so this may be the first time HKs have come to realize they are not alone in their challenging and sometimes painful upbringing.  Connecting with other with shared backgrounds can begin the process of healing for some.  This community is an attempt to do just that.

So what do you suppose this tweet means?  Why is Butler proposing that PulpitAndPen aka Pastor J.D. Hall do a “snarky beatdown” of a group of kids who are really struggling with life right now (some even having attempted suicide) and trying to come to grips with some real abuses?   You tell me, but it sure doesn’t sound appropriate for a Bible teacher and popular Christian blogger to treat hurting people in such a manner.  I really can’t picture Christ behaving in such a way.  I just cannot.

I’ve come to the conclusion that those seven truths may have some element of truth in them, but I seriously question the heart behind the entire article.  Yes, Mr. Butler, that was a “snarky beatdown,” and this homeschool mom is calling it as she sees it:  R.U.D.E.

But the wisdom from above is first pure,

then peaceable, gentle, open to reason,

full of mercy and good fruits,