“Daughters aren’t to be independent. They’re not to act outside the scope  of their father. As long as they’re under the authority of their fathers, fathers have the ability to nullify or not the oaths and the vows. Daughters can’t just go out  independently and say, ‘I’m going to marry whoever I want.’ No. The father has  the ability to say, ‘No, I’m sorry, that has to be approved by me.’”

Earlier I discussed influences in the homeschooling movement and mentioned that patriarchy has infiltrated the movement as well as in churches.  I was surprised at the accuracy of Wikipedia’s definition of Biblical patriarchy and, in particular, the men they identified who are associated with patriarchy:

Biblical patriarchy (also known as Christian patriarchy) is a set of beliefs in evangelical Christianity concerning marriage, the family, and the home. It sees the father as the head of the home, and responsible for the conduct of his family. Notable adherents of biblical patriarchy include Douglas Wilson,[1] R. C. Sproul, Jr.[2] and Douglas Phillips. Notable publications include Patriarch magazine and Above Rubies.[3] The biblical patriarchy movement has been said to be “flourishing among homeschoolers.”[4]

Don and Joy Veinot of Midwest Christian Outreach examined Vision Forum’s stance on patriarchy and wrote an article on their conclusions.  You can find the complete pdf file here. 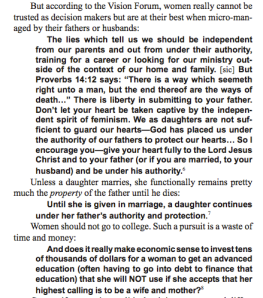 Don and Joy sum it up nicely here:

It is important to understand this teaching because it can infiltrate a church not only from the pulpit, but from church members on the inside.  And of course there are varying degrees of patriarchy that I have noted from readers who have sent me their personal stories.  I have been shocked at the treatment of women from patriarchal homes.  If the church preaches a patriarchal lifestyle, an abused wife cannot only be abandoned physically, emotionally, and spiritually by her husband, but by her pastor as well.  It is a very difficult system to leave.

I want to focus specifically on the daughters of patriarchal homes.  Below is a clip from the movie, Courageous, which includes some patriarchal themes.   Take a look and see if you can spot how the father uses his position as father to “own” his daughter’s heart.  This scene involves the father explaining that he wants to be the guardian of his daughter’s heart and gives her a “purity” ring, symbolizing her virginity, which will later be replaced by her wedding ring when she gets married.   It is notable that the movie’s director and producer, Stephen and Alex Kendrick, have ties with Vision Forum.

Blogger, Cindy Kunsman from Under Much Grace discusses this particular movie scene shown above.

Dating Daddy and his Proposal

I found the daddy-daughter date scene to be disturbing.  Essentially, the father proposes to his daughter, using language which indicates that he considers himself to be on equal footing and of the same order of person with his daughter’s potential mates.  Consistent with the belief within this subculture that young women remain married to the father through ownership until they marry another father-vetted and approved man, the father in the film uses the language of Vision Forum to reinforce the ideology of courtship.  Such a system which Vision Forum promotes as Biblical was not even demanded under Judaism, a concept that they filter through their distorted version of Covenant Theology.  (Read more HERE.)   So to adapt and cope with the inherent risks of trusting a daughter to conduct herself with dignity, grace and chastity, the father overcorrects for his legitimate concerns and fears through an extra-Biblical ritual which signifies ownership.  I felt sick at the close of the father-daughter date scene as the daughter gazed at the father’s heart-shaped ring that he actually places on her finger after his proposal – a proposal that she was duty bound to accept as an obedient daughter.  (With a suitor, she presumably has the liberty to decline such a proposal, that is, if her father decides to allow her that liberty. Not all do in patriarchy.)

This idea of dad owning his daughter’s heart is commonplace in families and churches which promote patriarchy.  We are now beginning to see young adults who have come out of this environment, many times filled with negative emotions and a host of other issues as they come to grips with this type of control in their personal lives.   These young adults are blogging and telling their stories.  We will be discussing more on this topic.

47 thoughts on “Fathers and Daughters: Who Owns a Daughter’s Heart?”