The need of parents to both deal with the pitfalls and understand their Second Generation Adults of homeschooling (those who suffered in a high demand Christian homeschooling culture).

In the Spiritual Sounding Board series about the Second Generation Adult who grows up in high demand religion (SGA), I mentioned my favorite example of bounded choice: that of the baby elephant who is tethered to a stake in the ground. Long after he has grown strong enough to break that tether, because he’s never known otherwise, he doesn’t even dream of walking away from it. A reader here at SSB, “BeenThereDoneThat” posted a video of the process with the message that we can break free from our limitations, just like the elephant. I’d almost forgotten that I’d included this analogy in this last part of the series on bounded choice. Though all people who get caught up in high demand religion find themselves bound by a tether of sorts, the SGA faces some additional struggles in addition to bounded choice that make the process even more difficult.

Elephants and an SGA’s Perspective

The advance of the concept of the SGA within the homeschooling movement generated some interesting blog discussions this week, notably, that the perspective of those who were homeschooled can differ sharply from the parents who pioneered homeschooling.  Homeschool Alumni Reaching Out (HARO) and Homeschoolers Anonymous offer a platform for the SGA to talk about the issues and problems within the Christian homeschooling subculture – and some see their efforts as a threat to homeschooling freedom.

Ryan Stollar, co-founder of and the Community Coordinator at Homeschoolers Anonymous, responded to some of this discussion on his personal blog this week. I found his example of an elephant delightful and amusing, and I read with interest. I don’t know if his critics picked up on the meaning, but I certainly did. I won’t give too many spoilers, save that I found it to be an excellent medium for communicating how a budding adult feels when trying to figure out where they fit in as they embark upon the world and how easily the can be disregarded if not discarded. It highlights the problem created by the expectations of parents and the communication problems that they often face when young adults fail to live up to all that their parents envisioned for them.

Now, my only caution here is that of language for which I almost feel hypocritical, as I often indulge in crude speech myself when I am very angry. Note that Ryan uses some expletives that some will find troublesome, but I believe that the great value in is narrative is well worth reading.

My great hope is that parents who feel threatened or who are suspicious of the disenfranchised SGA will step back to consider whether they are elephant or mouse. Could they possibly learn from the tale? As a commenter following the post notes, an old African proverb says, “When the elephants fight, it is the grass that suffers.” Consider whether there is a way to avoid any and all suffering when you read it.

I invite you to read Ryan’s

Elephant and Mouse: A Fairy Tale.

Last evening, I happened over a video of an elephant calf that had fallen in a fresh water well, a hole dug manually in the earth in Africa to collect rainwater for wildlife (and for people) to drink when the rains visit the dry plains. With the issues of clean water in Africa, it actually serves as a very healthy source of water, but it is not without its own problems. The water level in the well was low enough for the calf to have fallen in, becoming trapped. Workers help to rescue the calf from the well, then they help guide the very large little one back to its mother. I found the scene where the calf and the mother run to greet one another inspiring, and I could not help but think of the SGA.

Let me note that this isn’t a perfect analogy. A child of homeschooling who is now a very capable adult is most definitely not still a young child in need of the care of their parent in the same manner as the calf in the video vignette.

Having used the term “pitfall” so often recently in the discussion of the homeschooling movement and patriarchy that is so often associated with it, I don’t know that we could ask for a better word picture. The watering hole “wells” in Africa serve to supply many with life-saving water, but they are not without their hazards. Watching this young, helpless calf try to free itself from the pit seemed so relevant. The mother was helpless and frantic, and my heart ached to hear her cry to her calf. She had no means of freeing her little one.

How apropos for the relationship between parent and child in the aftermath of high demand religion which so often requires high demand parenting. Something that was meant for good became a trap for one who was immature and lacked the ability to keep from falling into the pit. Having recently written about the need for parents to work at being “safe persons” for their SGA at Under Much Grace, I found the image of the calf and mother running to meet one another hopeful and inspiring.

May parents consider that they can foster their relationships with their adult children, even if they don’t understand them and even if they don’t approve. Let us begin to explore the challenges before us, from one generation to another. When some SGAs get free from the proverbial pits that they grew up in, there are too many that don’t run with joy to their parents. Many parents shun their children because they fail to meet a standard of piety as if they were still just young children who still live under their roof. May we live in such a way that the love that we have for family can be fully expressed, despite the differences in perspectives because of the faith and love that sustains us.

I would even add this bit of humor here. I shared this picture on a social network, as you know how these types of things get passed around. 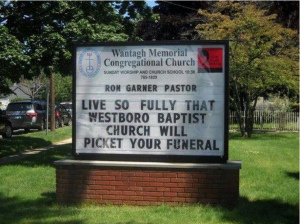 My dear friend Shirley Taylor wrote in response, “I am trying to live and teach in such a way that Westboro will have to stand at the end of the line to get to picket at my funeral.” I don’t know about you, but I find this to be quite good advice.

What do you think would help encourage better communication between First Generation homeschoolers and their and Second Generation Adults?  Who will picket your funeral?

May the discussion about the elephants in the homeschooling room commence!

92 thoughts on “Elephants and SGA’s Everywhere! Coming to Terms with Homeschooling’s Pitfalls”