Many people who have been hurt by religion want to escape from it.   We’ll take a look at an organization that is offering a refuge from religion, Recovering from Religion.    Is this the answer?

“Suppose one of you has a hundred sheep and loses one of them.

Doesn’t he leave the ninety-nine in the open country

and go after the lost sheep until he finds it?

I’ve been following tweets from reporters who have been attending the Religion Newswriters Association conference and my eyes opened quite a bit wider after reading tweets like this: 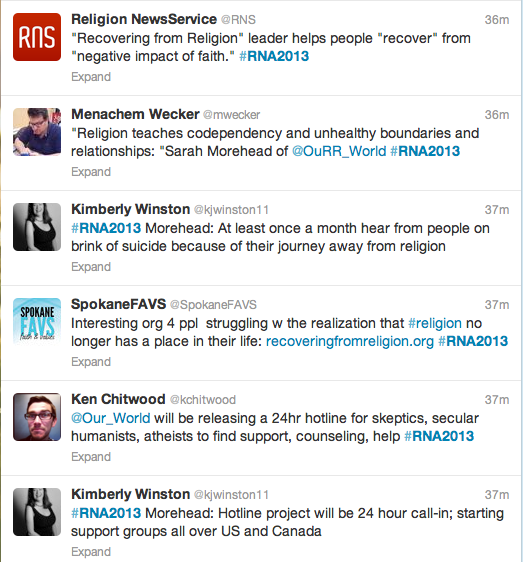 People on the brink of suicide because of their journey away from religion?  This breaks my heart, but it’s not surprising considering the kind of spiritual turmoil we regularly discuss here.  I was not, however, aware of this group, Recovering from Religion:

Who is Recovering From Religion?

If you are one of the many people who have determined that religion no longer has a place in their life, but are dealing with the after-effects in some way or another, Recovering From Religion (RR) may be just the right spot for you. We welcome everyone, from doubting theist to ardent atheist, and our goal is to assist you in dealing with the negative impact of religion in your life. We are honored to be a part of your journey to be free from faith!

Recovering from Religion is a well-organized group.  They offer support groups and you can see if there is one in your area.  This organization receives numerous calls and e-mails from people on their journey leaving religion.  I took a look at the site and was wondering what is their ultimate ending place.  Was it to validate and empathize with people and then lead them somewhere spiritually?  In my digging, it seems that it really is a place for people to go whose ultimate goal is to remove themselves from all religion, period.

RR is made up of people who have all given religion our best shot, but we can’t bring ourselves to accept the unacceptable any longer. If you’ve ever questioned the archaic edicts and laws of holy books, the inconsistent morality and questionable motive of ancient teachings (along with their many modern interpretations); if you’ve raised an eyebrow to virgin births, or found the flaws in resurrections, bronze age “miracles” and the ridiculously misguided “power of prayer;” then Recovering From Religion is the place for you.

I guess for some, the answer is no religion.  But what about those who have been burned by religiosity and churchianity and abuse and fake Christianity?  They still love Jesus, they just want real and authentic Christianity.  How can we reach them and tell them, “we know, we get it, we’ve experienced it, too?”    I’m concerned about those folks.