Skip to content
May 7, 2012July 4, 2013 Julie Anne
***
Some may be interested in seeing what Chuck O’Neal calls “defamation” in his lawsuit against me and 4 others.   Although the filed complaint is public,  I took screen shots and blocked out my last name and left out the other defendants.  These are the original complaints that were filed against me.
Try to click on the image to enlarge.   It looks like the copy was not lined up properly when scanned – sorry about that.   When Chuck recently amended the complaint, he added more “defamatory” phrases which came from this blog.  I’ll post those soon.Off to choir to tinkle some ivories.  Yes, life goes on even amidst a lawsuit. 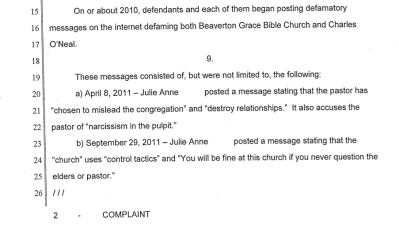 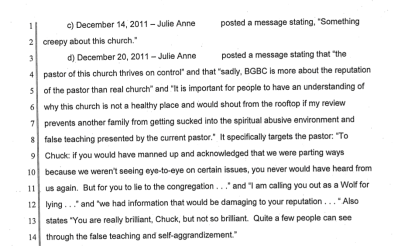