I am a survivor of Gothard’s cult. I experienced unspeakable physical, sexual, and emotional abuse from my mother and father, who were at one point among Gothard’s “model parents.” Gothard is not human. Gothard does not deserve compassion. Gothard is not a man, and he does not have the slightest shred of decency or humanity within him. Bill Gothard is a monster in human form, and as far as I am concerned, he can’t die soon enough. 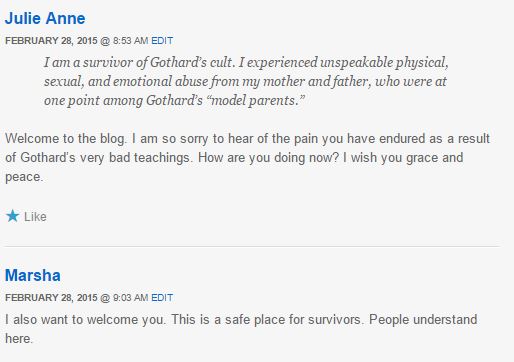 Julie Anne and Marsha, thanks for the replies. I’m doing as well as can be expected. I have PTSD as a result of my experiences with my family and with Gothard, which makes my life very difficult. I hold my parents primarily to blame for what went on under our roof, but as I research the IBLP and ATI aftermath, I’m beginning to wonder if my injuries do not belong solely and entirely on Gothard’s doorstep. My parents were victims as well, after all.

My mother fell prey to Gothard’s teachings as a result of her own trauma; she was sexually abused by her alcoholic father as a teenager in the 50’s/60’s, and her experience with IBYC in the 70’s was part of her seeking help and resolution for her own pain. My father went along with all of it out of love for my mother, which made the results a thousand times more unspeakable. Our family’s horror story with Gothard was a long downward spiral that lasted nearly 25 years, culminating in my parents divorce, which was the best thing for all of us.

To those who defend Gothard, I say this: You are liars and cowards. You are legalistic, petty, unfeeling, remorseless sadists, and you do not love. You don’t know the love of God, the love of man, or even the most basic love of self. You are perpetrators of hatred and abuse, and I do not pray for you and I do not have compassion for you. My own connection to God has gone dark for over 20 years, so I do not claim to be a Christian. I can only say that I would rather spend an eternity in hell than 5 more minutes with your version of “God.”

IBLP is the very embodiment of evil, as is Bill Gothard himself. I believe the man is clearly insane. He deserves no defense of any kind.

[Admin note: JA took the liberty to change one sentence so it doesn’t read as a fact, but a personal opinion.]

Late edit: I’ve added the pseudonym “Dash” to the anonymous commenter for clarity.