What is the church’s response to Christians who are married to unbelievers?

I walked my son to his bus stop this morning and came across this lonely crocus in my front yard. Everything in my yard says Winter is still here, but this one little crocus showed her pretty face in the recent warm days we’ve had. I was thinking about the personal story (below) and wondered if this is what Gracie feels like – alone in her church. We’ve discussed singles in churches and how difficult that can be, but we haven’t discussed what it’s like for a married person married to an unbeliever and the church’s response.

I’d like you to read about Gracie, who is married to an unbeliever.  Sometimes spiritual harm comes to people in the form of emotional abandonment, apathy, not caring for an individual. Let’s read Gracie’s story. I’m thankful she was willing to share it with us. 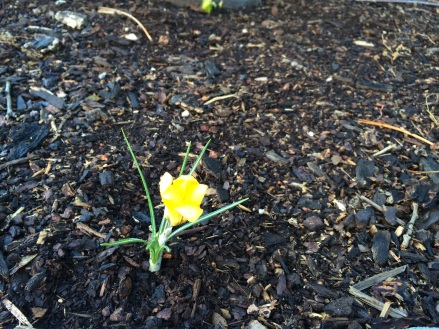 My Name is Gracie: I’m Married to an Unbeliever

I renewed my relationship with God thirteen years ago. Occasionally my husband would come to a service for Christmas or Easter. I would introduce him to my friends, but we would often end up sitting by ourselves. No one would invite us to sit with them. I don’t really know why.

The church is missing the mark when it comes to dealing with spouses who are married to unbelievers. In my experiences (I’ve been to six churches since I renewed my relationship with Christ) at different churches, except for the one I attend now, it has always been the same thing. People find out you are married, but your spouse doesn’t attend church. They ask if he is a believer, and you say no. From then on, you feel like half a person because of the way you are treated.

In one church, which I attended for 8 years, I was involved in one ministry. I was in leadership. However, when I would give advice to others regarding their marriages, I was told “You have no right to talk to anyone about marriage. Yours isn’t so good.” I did attend outings with others, but I often felt like a third wheel to all the couples there. In all of those years, I was never asked to be involved in any other ministry, and although many of the couples I know were invited to dinner with the Pastor and his wife, I never was. The church is not huge either. It makes you feel less than. Churches focus so much on marriage and family, and marriage sermons are always geared to those who are believing couples. I only heard one sentence in all my years that slightly mentioned the unequally yoked issue. It basically said “If you are married to an unbeliever, act like a christian.” Wow, that’s helpful.

People in my situation have many struggles. We have divided loyalties. We want to be at church often, and are questioned when we can’t attend every event. We are told to be sold out for Jesus, but can’t be there all the time because our spouse gets upset, and the church then thinks we don’t want to be involved. We sit in the pews and feel sad when we see the happy couple with the two kids who are shining examples of a ‘christian family’ and feel like there is something wrong with us because we sit alone Sunday after Sunday.

I left that church two years ago after attempting to confront leadership in the ministry I was involved in. I did it biblically, per Matt. 18. However, when I attempted to bring in witnesses, the lead pastor wouldn’t allow it. It was going to be me against the three of them. I knew how it was going to turn out, as these leaders have been confronted before, and nothing was done. I left that church and never returned.

I started attending another church, and things in my marriage were getting worse. I went to see the pastor and his wife. All I got for advice was the typical ‘pray more, submit more, have more sex, etc’. I told them he had committed adultery, and found out they don’t believe in divorce even for adultery. I was stunned. I confronted the pastor’s wife one Sunday and asked “So he can sleep around all he wants, I can’t divorce him? So, what, I’m supposed to keep loving him, having sex and just hope I don’t get HIV?” She paused and said “Well, no.” It was like that thought never even entered her mind! I left that church shortly after once I discovered they are heavy into patriarchy, too.

Many of the women I communicate with in a ministry which deals with this issue have had things said to them such as “You must submit, even to sin. You must obey, you have to be Jesus with skin on. Because how would you feel if you were married to your husband for life but he/she never got to know the Lord? It’s your job to get them saved!” This is unbiblical, and it puts a tremendous amount of pressure on us, especially wives. Our husbands are supposed to be representing Jesus, and we ladies are supposed to be the bride. We take on a role we aren’t meant to. If you are married to an abusive spouse, or an addict, it is even harder.

I will end by saying I have finally found a wonderful church. I did interview the pastor for two hours before I joined, and had a list of questions for him. I was very pleased with his responses. In the midst of all this, I found out one month ago my husband is having an affair. I did everything those former churches told me to do, I prayed, fasted, submitted, loved, encouraged, and he still had an affair. I have come to realize that even if you love perfectly, they may not love you back. Jesus loved perfectly, and they still killed him. Even today, people still reject Him. I know I did the best I could, but my husband still chose someone else. I went to my current church and explained the situation, as this has been a not great marriage for a long time. No one condemned me. No one told me God hates divorce. What did they tell me? “You are worth more than what your husband is doing to you. It’s not your fault. How can we support you?” That’s Jesus. That’s love.

160 thoughts on “My Name is Gracie: I’m Married to an Unbeliever”