Christian leaders put their spiritual spin on sexual abuse and premarital sex and devalue young women in the process.

The church has sometimes done a poor job on handling sex abuse and premarital sex and I was reminded once again this week.

But let me back up and give other examples of how Christian leaders put their spiritual spin on this issue how they devalue young women in the process.

You may recall the sex abuse allegations against Doug Phillips by Lourdes Torres-Manteufel. When news of this case came out, we heard from Doug Wilson. He did not want to call her a victim, but in his article, he expects a victim to behave a certain way in order for her to be validated as a victim, ie, she (Lourdes Torres) should have left Phillips’ house immediately. Further in the comments, we read from some who said that because Lourdes didn’t “cry out,” her story is suspect. This is one spiritual spin of sex abuse. There was no regard for the role Phillips played as her spiritual authority, her employer, long-time mentor, etc.

The Christian community and Mormon community have similar teachings on purity. Mormon kidnap and rape victim, Elizabeth Smart, described the purity culture she was taught:

Smart said she “felt so dirty and so filthy” after she was raped by her captor, and she understands why someone wouldn’t run “because of that alone.”

Smart spoke at a Johns Hopkins human trafficking forum, saying she was raised in a religious household and recalled a school teacher who spoke once about abstinence and compared sex to chewing gum.

“I thought, ‘Oh, my gosh, I’m that chewed up piece of gum, nobody re-chews a piece of gum, you throw it away.’ And that’s how easy it is to feel like you no longer have worth, you no longer have value,” Smart said. “Why would it even be worth screaming out? Why would it even make a difference if you are rescued? Your life still has no value.” (Source)

Samantha Field, blogger at Defeating the Dragons, was taught an object lesson by a Christian speaker to promote purity. She describe it as follows:

My sophomore year in college, another speaker shared a similar object lesson– ironically, in the exact same room, also filled exclusively with women. She got up to the podium carrying a single rose bud. At this point I was more familiar with sexual imagery, and I knew that the rose had frequently been treated as a symbol for the vagina in literature and poetry– so, again, I knew what was coming.

This speaker asked us to pass the rose around the room, and encouraged us to enjoy touching it. “Caress the petals,” she told us. “Feel the velvet.” By the time the rose came to me, it was destroyed. Most of the petals were gone, the ones that were still feebly clinging to the stem were bruised and torn. The leaves were missing, and someone had ripped away the thorns, leaving gash marks down the side.

Samantha echoes similar sentiments Elizabeth Smart that used regarding the internalized message young ladies might feel when hearing these teachings:

However, all of these object lessons contribute to one message: your identity and value as a woman is tied to your sexual purity. If you surrender your virginity, you are worthless. Disgusting. Repulsive. Broken. Unwanted.

I encourage you to read Samantha’s excellent article, roses– how the purity culture taught me to be abused.

That brings me to a picture I found on my friend, Ryan Stollar’s, Facebook page from a book he was reading by Lisa Cherry and her daughter Kalyn Cherry-Waller, entitled, Unmask the Predators: The Battle to Protect Your Child. Here is a summary of the book:

WARNING: THREATS TO YOUR CHILD AHEAD! Losing your child’s heart to the perverse world of a sexual predator is truly every parent’s nightmare. When an $800 cell phone bill revealed a secret relationship between our highachieving, Sunday School teaching 15 year old daughter, Kalyn, and a 46 year old man from our congregation, we were horrified. The aftermath of destruction, as it usually is with sexual abuse, was disastrous. Rebellion, depression, wrong relationships, eating disorders, and selfmutilation suddenly turned home into a war zone. In Kalyn’s mind we, her parents, were her enemies while the sexual perpetrator remained her hero. How could something so bizarre happen in a loving Christian home? (Source)

I was struck by Amazon’s “About the Author:”

Lisa Cherry and her daughter Kalyn Cherry-Waller have navigated the storm of extreme family crisis and spiritual warfare emerging as a victorious voice for others. Their ministry has placed them on the front lines speaking to tens of thousands of parents and teens each year. Their message acts as a beacon of light and hope to aid parents and teens with practical communication tools to avoid crisis such as child predators. Championing the cause of better family communication and spiritual growth, Lisa and her husband Doug are founders of Frontline Families Ministries which is dedicated to providing communication tools and practical resources for growing spiritual and healthy families. The Cherry’s are pastors and make their home in Carbondale, Illinois.

In the wake of the sexual abuse allegations among homeschoolers, Ms. Cherry has posted an article which she boasts has been read by nearly 30,000 people:

I published my  article An Open Letter to My Fellow Homeschool Parents: Sexual Predator Accusations Among Homeschoolers?

NOW 29,708 have read it already. And the number is growing every day! (Source)

Ms. Cherry has a  website, ministry, sells books, and speaks on the topic of sex abuse in the hopes of helping parents with this sensitive topic, but what is her message?  I’m sure there are a lot of practical helps that are very good. I also appreciate that she is addressing this important topic that is sometimes taboo in church, especially after having experienced it in a personal way, but I am concerned about the message that is sent to parents and their children about survivors: 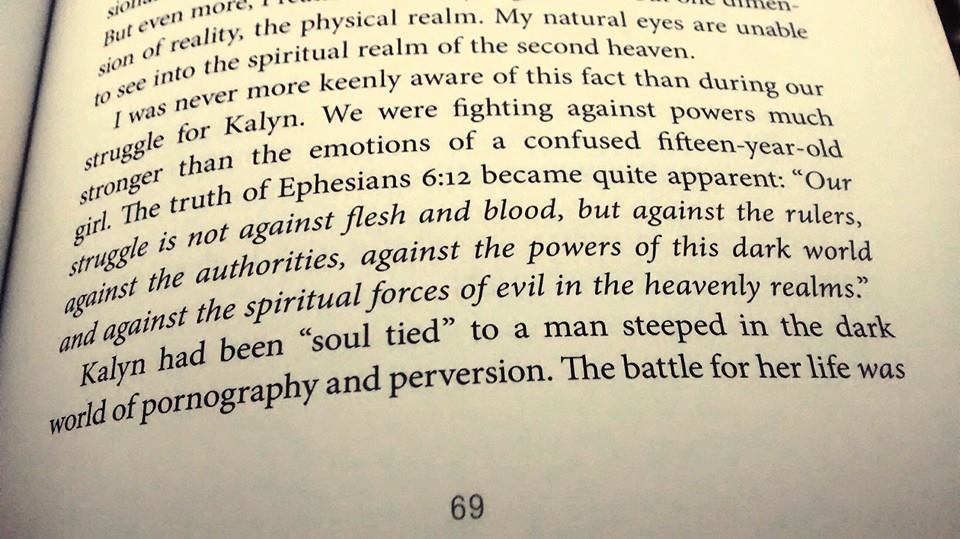 “I was never more keenly aware of this fact than during our struggle for Kalyn. We were fighting against powers much stronger than the emotions of a confused fifteen-year-old girl. The truth of Ephesians 6:12 became quite apparent: “Our struggle is not against flesh and blood, but against the rulers, against the authorities, against the powers of this dark world and against the spiritual forces of evil in the heavenly realms.”

Kalyn had been “soul tied” to a man steeped in the dark world of pornography and perversion. The battle for her life was a battle in the heavenlies. My busy bluster of motherly activity highlighted by my angry yells of correction did no good.”

Do you see it?  Do you see the problem I’m having with this?  Do you see any spiritual conclusions that make things confusing for a sex abuse survivor? Let’s talk.