Quick note:  Last weekend, I went to the Oregon Coast to a ladies retreat.  Knitting is my constant companion at retreats – – especially in case the speaker disappoints.  However, I did not get one stitch of knitting done.  The message was very good, convicting, refreshing, and motivating.  And you cannot put a price tag on getting together with long-time friends, sharing heart-to-heart conversation, laughing and crying together.  What a precious time. 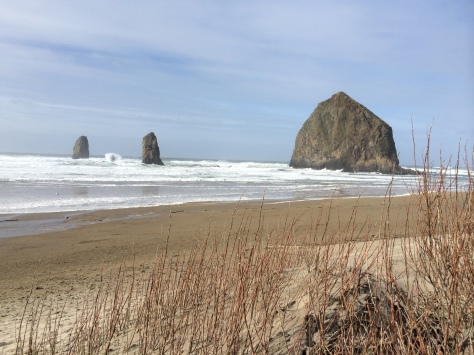 . . . but I would be lying if I said I saw this during the retreat.  The weather was stormy with strong winds and horizontal rain keeping me inside the entire time.  After driving away, upon realizing I not seen the ocean once during the weekend, I pulled over to get a shot.   Here’s the shot I took – the only time during the weekend that wasn’t raining/storming –  – – from my iPhone, with no photo editing.  The Oregon coast is gorgeous.  It is free for all to enjoy, and worth a visit.  This was taken in Cannon Beach.

Now this is kind of funny.  I took a picture of a tsunami evacuation sign, but had not looked at the fine print until getting home.   🙂

What is our responsibility when we are spiritually abused?  Were we part of the problem?

Reader “ThinkingChristian” has been processing her spiritually abusive experience and sent me an e-mail I thought would be important to discuss.  When someone is stuck in the recovery process, I want to make sure they are given top priority to process here and also have others chime in.

Important note:  at any time you feel stuck spiritually, you have an open invitation to “invade” the current topic and ask for help.  It doesn’t bother me in the least to have two conversations going on.  Yes, you and your recovery are that important and I think my readers would agree with me.

We’ve touched on this topic before, but it’s good to revisit it again as there are always new survivors visiting the site.

I wanted to ask a question, and figured you would be a good person to bounce this off of, considering you have probably heard it all in the spiritual abuse realm.  I am still pretty new to all of this, and the shock and hurt of it all has not worn off yet.  I still have friends in my former church and I realize that a common phrase keep recurring in our conversation regarding me “taking responsibility.” I also remember before I left that my pastor would say something along those lines as well.  I think the general idea is that I should take responsibility for being hurt, anger, etc by the actions or words of the persons involved, because if my identity and hope were totally in Christ, I would be able to better allow it to roll off my back.

Now I do take responsibility for the fact that I had unknowingly set up my church and some leaders as an idol in my heart, and I had a lot of pride regarding my church and all the “good” things about it.  I can also say that because I desired to be accepted and liked, and worry about what others thought (pride)  it also made me susceptible to be a bit more bothered by things.  However, it seems wrong to tell someone to talk responsibility for being hurt/anger by the fact that instead of being helped in a time of need I was verbally assaulted, shunned, generally just treated extremely poorly by most.  To me it would seem that you would darn near have to be in your glorified body for this type of treatment to NOT have any effect on you.  It also seems very callous on the part of some of the leadership to KNOW that they have sinned against someone, and instead of owning it, repenting and trying to bring about true restoration, they would say to “take responsibility.”

Have you heard of this before?  I always want to have the right understanding about things, and not just throw the baby out with the bath water so to speak.

I have also been told that God is trying to teach me humility through these experiences.  I think I have heard that word more than all the others.  Again if you have been publicly humiliated and shamed, called a fake Christian with fake fruit, and just in general treated very poorly by a body of believers, how does that teach humility?  More so how does they get to declare how God is using their sin?? It seems very convenient to me, and again callous.

58 thoughts on “When we are spiritually abused, are we partly responsible?”