This morning, I started to add a new comment to the Together for the Gospel statement released on Facebook yesterday and noticed the comment number decreasing.  When I refreshed the screen, the whole thing was GONE!  Zilch, Nada!

I’d love to be a bug on the wall and see the exchange of e-mails and phone calls this morning after that happened.  Maybe something like this:

CJ Defender #1:  Hey bro, T4G removed their statement, whatcha going to do now?  Are you going to say something publicly?  Should we remove our blog articles in support of the statement?  I mean, if we keep ours up, that’s confusing, ya know, man? I just don’t know the right thing to do.  What does it look like to have our blog articles posted in support of the statement if the T4G statement is gone, ya know?

But seriously – what is Denny Burk going to do about this (screen shot taken from his blog in support of the T4G statement)?  Read his last statement. 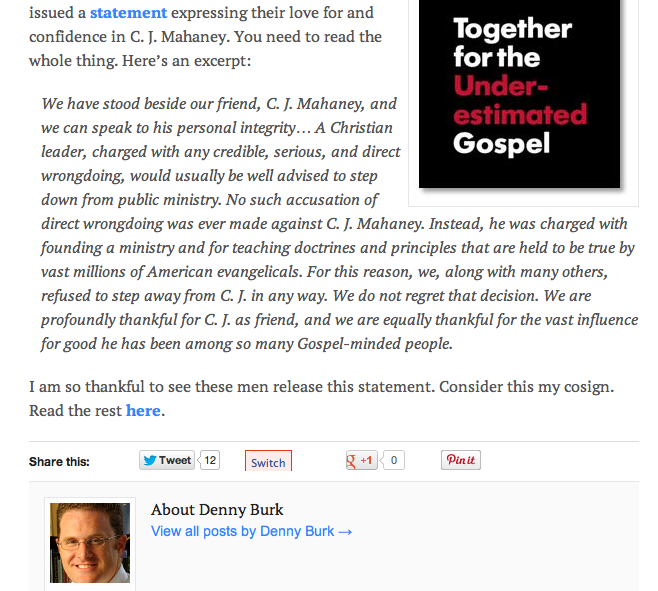 So, first I saw removal of comments = silencing dissenters

Then the whole statement was removed = damage control

Those of you who have read here long enough surely recognize those as signs that high-controlling pastors use which sometimes cross into abuse.  We as a collective church are asking those collective leaders for accountability and they are saying a collective “NO” to us.  That is bold and brazen to do on a public stage.  That’s fine with me, because there are many, including me, who will continue to expose this.

I think this is the wheat separating from the chaff right before our eyes.  God is cleaning His church. We must not be silent.  We must keep pressing in.  It’s time to turn over the tables in the complacent Church of Abuse that has continued for far too long.

I’m sure this post will be updated with related blog posts, screen shots, who knows.   So be sure to check back to see what is new.

Here is the original statement:

Together for the Gospel

STATEMENT FROM MARK DEVER, LIGON DUNCAN, and ALBERT MOHLERMay 23, 2013We are friends who have been brought together for the gospel. Over the last several months, we have wanted to speak publicly to the issues that have related to our friend C. J. Mahaney. A Maryland judge’s recent action to dismiss a lawsuit against Sovereign Grace Ministries offers us the first opportunity, and responsibility, to speak to this issue. We could not speak to the issues involved so long as they were raised only in the context of an action in the civil courts. We have never made a public comment with regard to claims and counter-claims in a civil lawsuit, and we will not violate that principle now.Claims presented in a civil lawsuit seeking financial compensation are beyond the ability of the public to render judgment. Often, such claims are even beyond the ability of a court to deliberate. To comment on such claims is irresponsible, since no one apart from the court and the parties directly involved has any ability to evaluate the claims presented. If the filing of civil litigation against a Christian ministry or leader is in itself reason for separation and a rush to judgment, no ministry or minister is safe from destruction at any time. Furthermore, the effort to try such a case in the court of public opinion prior to any decision rendered by an authorized court is likewise irresponsible.We have stood beside our friend, C. J. Mahaney, and we can speak to his personal integrity. We can make no judgment as to the truthfulness of the horrifying charges of sexual abuse made against some individuals who have been connected, in some way, to Sovereign Grace Ministries and its churches. Our hearts must go out to anyone, and especially to any child, who suffers abuse at the hand of anyone. In such a case the legal authorities must use the full power of the law to investigate and to prosecute any perpetrator of such crimes. We must take any responsible action to protect the vulnerable, and we must act immediately to inform legal authorities of any charge or claim of sexual abuse, and do so without delay. Our first response must be to call the police, to act to protect the child or young person, and then to proceed to biblical church discipline when the facts demand such a response.If a Christian leader is accused of any wrongdoing, those to whom he is accountable must investigate the charges and then deal responsibly with the evidence. If a criminal accusation is made, Christians have a fundamental duty to inform law enforcement officials. This does not, however, preclude or mitigate the church’s responsibility for biblical church discipline.A Christian leader, charged with any credible, serious, and direct wrongdoing, would usually be well advised to step down from public ministry. No such accusation of direct wrongdoing was ever made against C. J. Mahaney. Instead, he was charged with founding a ministry and for teaching doctrines and principles that are held to be true by vast millions of American evangelicals. For this reason, we, along with many others, refused to step away from C. J. in any way. We do not regret that decision. We are profoundly thankful for C. J. as friend, and we are equally thankful for the vast influence for good he has been among so many Gospel-minded people.Our heart goes out to anyone who has ever suffered abuse of any kind. Our emphatic encouragement would be for anyone who has ever suffered such abuse or knows of anyone made vulnerable to such abuse to contact law enforcement officials without delay. We must then allow the law enforcement agencies and the courts to do their proper work. When criminal charges are filed, the public is then presented with evidence upon which it can draw a responsible judgment. On matters of protecting the vulnerable, Christians know what judgment must be made. We side with the victims.Our hope and prayer is that Christ’s healing and health will come to all parties involved in this matter and that justice and righteousness will prevail for all. May every true victim of any injustice be vindicated. May every doer of wrong be exposed. And may all of us speak no further than we can responsibly speak.

Those who minister in the name of the Lord Christ bear an inescapable duty to live and to minister in a way that is above reproach. Those who teach, reminds James, will face a stricter judgment. [James 3:1] May everything we do, everything we teach, and all that we are be measured against that standard.

Together for the Gospel,

****** Evidently, TG4 removed the statement from their Facebook page and then posted it on their main website.  I had been checking the TG4 site several times and it was not there before (when there were 50+ comments on the Facebook page).   When they moved it to their site, all of the Facebook comments were entirely scrubbed.  Also, please note, they do not allow comments there.  (No-Talk Rule)

Bill Kinnon provided two captures with many of the comments from Together for the Gospel Facebook page: here and here.

167 thoughts on “Just like that: T4G Statement of Support for Mahaney is Removed!!”