Tim Bayly is the pastor at Clearnote Church in Bloomington, Indiana, and president of Clearnote Pastors College. He received his M.Div. from Gordon-Cornwell Theological Seminary and is the author of the book, “Daddy Tried: Overcoming the Failures of Fatherhood.” Tim writes with Joe Bayly at Warhorn – Out of Our Minds. They formerly wrote at Balyblog. 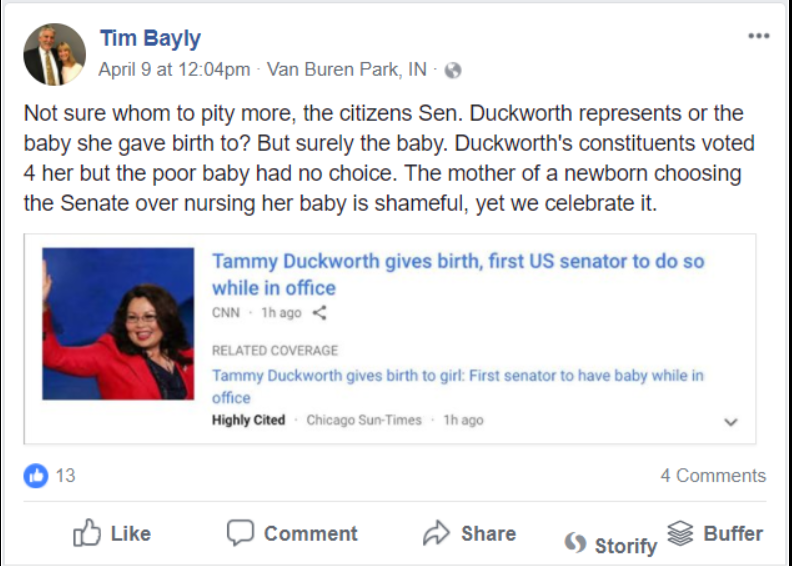 Not sure whom to pity more, the citizens Sen. Duckworth represents or the baby she gave birth to? But surely the baby. Duckworth’s constituents voted 4 her but the poor baby had no choice. The mother of a newborn choosing the Senate over nursing her baby is shameful, yet we celebrate it.

Duckworth is a retired Army lieutenant colonel who was a helicopter pilot in the Iraq War. She was the first female double amputee from the war after suffering severe combat wounds when her Black Hawk helicopter was shot down.

Senator Duckworth (D-IL) is the first active U.S. Senator to give birth while in office. Due to stringent Senate rules, she proposed a resolution to allow children under the age of one on the Senate floor. This proposal was passed unanimously and on April 19th she was wheeled on to the Senate floor with her baby daughter to cast a vote.

Senator Duckworth has opened the path for senators who are parents of infant children to continue their duties while caring for their child.

What would cause a Christian such as Tim Bayly to shame working mothers and those who support them? There is nothing new with mothers working. Mothers work for various reasons, including the need to take care of their family. Did Tim have a conversation with Senator Duckworth where she confirmed she was choosing the Senate over her baby?

Perhaps Tim Bayly has an all-around problem with Tammy Duckworth. Let’s review her credentials: high-ranking military official, which means she ordered men. Democrat. She creates and votes on rules for our country. She is a married, working mother.

Perhaps Tim doesn’t believe that a woman should serve her country in a government position. Or, perhaps a woman can serve in a government role, but only as a single woman. But, I could see how that could cause problems too. I’m guessing she doesn’t fit Tim’s idea of a good, submissive wife and mother.

Does Tim Bayly think it is important for fathers of newborn infants to bond with their child? Why not hold new fathers to the same standard and pity these children?

For whatever reason, this Christian man decided to provide disrespectful commentary on a decorated veteran who continues to serve her country as an elected official. Not only did he disrespect her, but he disrespected millions of working women whose daily lives depend upon their jobs. I don’t think Senator Duckworth’s constituents or infant child are the ones to be pitied.