Administrative note: Michael Newnham has given me permission to cross-post his article from Phoenix Preacher blog. We have both spent countless hours investigating, talking with people, gathering source documentation, first separately, and then when we realized we were uncovering similar information, made the decision to work on this as a team.

As a personal note, I have such great respect for Michael. He led the way on social media reminding everyone each week to pray for Saeed and his family, petitioning God for Saeed’s release from Iranian prison. When news came of Saeed’s release and there were allegations of domestic violence, etc, he was quite shocked. It took quite a bit for Michael to even consider that what we had been told by ministries and leaders that perhaps all was not as presented. I’m grateful for the opportunity to work with a man who has much integrity and wants the church to remain true and set apart in this dying world. ~Julie Anne

Seeking the Truth about the Saeed Abedini Story: Part 1 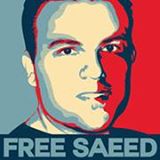 This is Part 1 of a multi part series that will explore the situation around Saeed Abedini, his imprisonment, and his actions before and after his captivity.

When Saeed Abedini was imprisoned in Iran in the summer of 2012, the church here and abroad set about to free him with one of the biggest campaigns in recent memory.

Abedini was presented to us as an innocent missionary, a man of God imprisoned for his faith in Jesus Christ.

He was held in horrible conditions we were told, tortured and beaten, often at the edge of death.

The church mobilized as rarely before as organizations like the American Center For Law and Justice, men like Franklin Graham, and hundreds of churches and individuals took up the cause.

Millions of dollars were raised, millions of words written and messages sent to free Abedini before it was too late.

The more we learn, the more we call into question the truth of the narrative we were fed.

According to an Iranian publication these pictures were taken in the prison Abedini was in from November 2013 on. 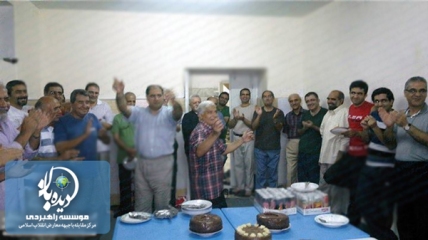 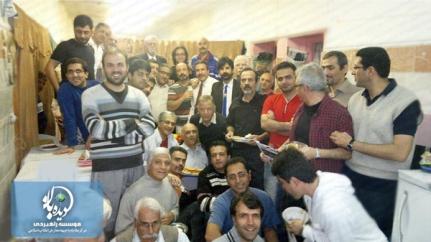 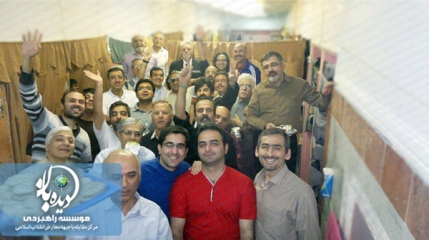 When I asked Abedini about these photos, he declined to comment.

Others were told that it was a trick perpetrated by the Iranian government to make it appear that he was fine.

When I personally asked him during a phone interview whether he was beaten and tortured as we were told, he continually reiterated that it had been for the first six months.

That brings into question what was going on in the two years after that.

Many of us were astonished by the fact that Saeed Abedini looked rather fit when he arrived back in the U.S.

We were further astonished to hear that Abedini had a cell phone and was able to not only communicate with his family, but to watch movies and surf the net.

These pictures may explain how that was the case….

These same pictures appeared on Naghmeh Abedini’s wall and then disappeared.

Sources tell us that she was allegedly ordered to do so by the ACLJ.

The question before the house is this…

Were Franklin Graham, the ACLJ, and Naghmeh Abedini aware of and exaggerating the truth of Abedini’s captivity?

Two years ago, the ACLJ published this;

“Pastor Saeed is facing constant threats to his very life in the new prison.  There have been several nights where he has awoken to men standing over him with knives.  Pastor Saeed’s “cell” is only separated by a curtain from the rest of the violent prisoner ward he is forced to share, allowing dangerous prisoners – murderers and rapists – unfettered access to him 24 hours a day.

He has also been robbed at knifepoint several times, stripping him of what few necessities he has been permitted to purchase for personal hygiene.

As a result of the robberies, the utterly deplorable conditions of the prison, and the lack of doctor-prescribed medication which is being withheld by prison authorities, Pastor Saeed’s health has quickly deteriorated.

The pain in his stomach has returned and he is now experiencing increased pain in what he described to his family as his kidneys.  As a result of repeated beatings in Evin prison, Pastor Saeed suffered from internal bleeding.  After months of being refused medical care, Pastor Saeed was allowed to see a doctor and was prescribed medication earlier this year.  As a result of that medication, his physical condition had improved and his pain had subsided.  However, since being moved from Evin to Rajai Shahr last month, Iranian officials have refused to allow him this critical medication and his condition is worsening.

He is being refused medication, prescribed by Iranian doctors, for injuries he sustained from prison beatings.  This is one of the most deplorable human rights violations imaginable.

To make matters worse, the prison conditions and lack of basic hygiene have led to his body being covered head to toe in lice.  Because of the lice and increased pain, Pastor Saeed has been having trouble sleeping.  He is also experiencing symptoms of recurring urinary tract infections.  There is no medication to stop the infections.  He is now also experiencing significant joint pain.

His family reports that Pastor Saeed has also noticeably lost weight in the new prison from lack of proper nutrition.

The conditions he faces are unfathomable.  He faces direct threats to his life on an almost daily basis.

…The time is now to pressure Iran for his release.  Each day could be his last.”

Were the conditions of his captivity continually exaggerated to keep attention on his plight?

Some sources say yes… and that Naghmeh Abedini was allegedly instructed by others to lie about them when she had questions herself..

We received this statement from Mrs Abedini’s representative;

“During her husband’s imprisonment, Mrs. Abedini’s driving concern was always the safety of her husband and she followed the advice of the counsellors that were helping her achieve that end. Her information regarding Saeed’s prison experience came directly from him and those who visited him, and when they were able to be in contact, he actively directed her in what he expected her to do.

Now that Saeed has been released, she is praying for the restoration of her family”

Let me be clear…any imprisonment is painful and difficult.

However, the public would have interceded without any embellishment of the facts.

It is purported that Abedini’s situation was a cash cow for both Graham and the ACLJ, as well as a political tool for those hoping to stop the Iranian nuclear deal proposed by President Obama.

Framing his captivity in the direst possible way would have enabled the donations to keep flowing and kept the story on the front burner of American media.

Thus, the public in general (and the church in particular) were possibly subject to, if not outright fraud, gross misinformation.

Today, Saeed Abedini will speak at your gathering…for a reported 7500.00…using the old narrative.

If this narrative is a mixture of fact and fiction, it was mainly propagated by Naghmeh Abedini who tirelessly traveled the world to advocate for her husbands release.

While I believe she is complicit in whatever untruths were spread, I also believe that she was quite possibly a victim of powerful men, especially her husband.

It was that abuse that she said caused her to cease her advocacy and that we will examine more closely in the second part of this series.

32 thoughts on “Seeking the Truth about the Saeed Abedini Story: Part 1”