The Council for Biblical Manhood and Womanhood is a parachurch organization aimed to promote complementary differences between men and women, yet only men run their board under President Owen Strachan.

The other day, my blogger friend, Tim Fall, and Gail Wallace, co-founder of The Junia Project, were tweeting about this: 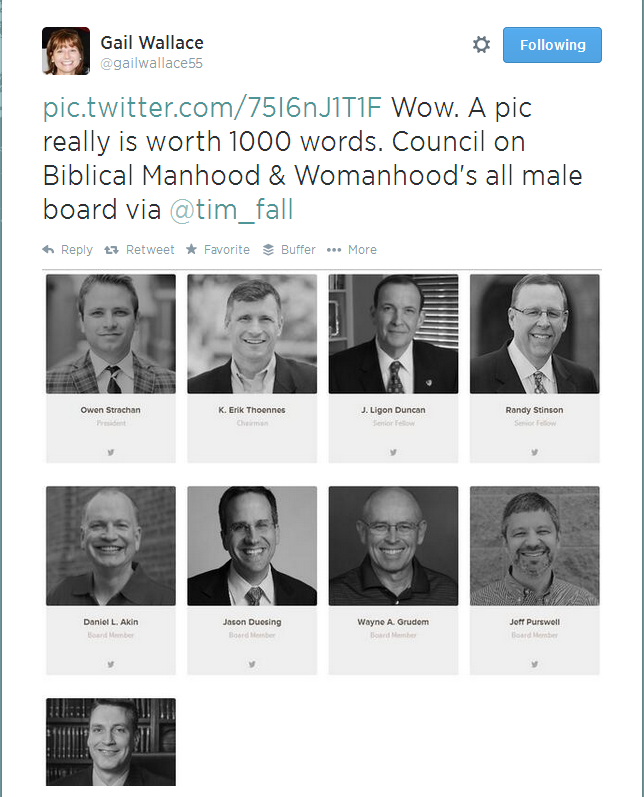 Here is the mission statement for Council for Biblical Manhood and Woman (CBMW). CBMW exists to:

The mission of The Council on Biblical Manhood and Womanhood is to set forth the teachings of the Bible about the complementary differences between men and women, created equally in the image of God, because these teachings are essential for obedience to Scripture and for the health of the family and the church.

The CBMW mission statement elaborates on the following points and you can see how important they feel these complementary differences are:

1. The authority of Scripture is at stake.

2. The health of the home is at stake.

3. The health of the church is at stake.

4. Our worship is at stake.

5. Bible translations are at stake.

6. The advance of the gospel is at stake.

It’s important to note that CBMW is a parachurch organization. Evidently, CBMW feels it their obligation to supplement what we get from our churches and our pastors with their “important” information. Me thinks they are acting in fear. Is God not big enough to be working in local churches through the lives of His Saints without this organization? Is God not big enough to speak His words through people sitting in the pews of the local church and church leaders? Perhaps this group thinks not or we would not be inundated through social media, blogs, conferences with their material.

But back to the topic at hand. A number of us joined the Twitter conversation about the 100% male Board at CBMW. We were wondering why there were no ladies on the CBMW board. A lively discussion ensued. In the conversation there was some back and forth between a gentlemen who challenged some of us about CBMW’s motives. I tweeted that there was no way CBMW would have a woman on their board because of their articles I’ve read about roles of women, and certainly from the original CBMW co-founder, John Piper, who has spoken about women in leadership roles in the civilian world.

During that Twitter conversation, I was reminded of a personal conversation I had with the director of a non-profit board on which I’m currently serving (non-religious board). I had never been on any boards before and he explained to me that the board of his particular non-profit makes all the executive decisions, including whether or not to fire him. So, in the context of CBMW (and if all boards work in similar capacities), this means that a woman could in fact initiate the process to fire a man. She would be in essence his authority in a hierarchal role. I know that does not jive with the teachings/articles I’ve seen from CBMW and so this was the basis of some of my arguments. To settle the issue, I decided to tweet Owen Strachan, the president of CBMW, directly:

Tim, who was also involved in the conversation, also tweeted directly to the source to get clarification:

@CBMWorg Serious question: would women be allowed to join the CBMW Board of Directors? — Tim Etherington (@timetherington) July 3, 2014

I haven’t yet received a response to my tweet from Mr. Strachan (and didn’t really expect to get one over the holiday weekend), so I searched the CBMW site to see if there was anything published on the topic. Sure enough I found something, and it is specifically related to parachurch organizations.  As I said earlier, CBMW is a parachurch organization. Take a look:
(Source)

I have to admit, I was delightfully surprised to read this. So, according to CBMW, women can serve “alongside men as members of a board of directors!”  Now again, keep in mind, this is CBMW’s interpretation of what they believe a woman’s role can include (and that opens up that same can of worms about CBMW usurping pastoral role in the local church body and a pastor’s interpretation of biblical roles), but whoa – – ladies, doncha just want to line up and inquire about a position on the Board of directors at CBMW?

Today at SSB, we’re going to do something a little different. We’re going to work on math, specifically percents. Percents are your friends, people. Do not click the little “x” at the top of your screen.  Percents won’t kill you. This will be easy. We’re going to do it in story problem form, too. You can do this!

Here we go: as of right now, 100% of the current CBMW board members are men.

It makes one wonder if perhaps CBMW’s guidelines for parachurch oranizations and women as members of boards only applies to other parachurch organizations, and not specifically, CBMW.

I think I am going to break mold and allow a man to speak for me. Gomer Pyle, take it away:

Here’s the next percentage problem. Please check my math:

Here are three tweets in a row from Mr. Strachan. He seems to really appreciate women, doesn’t he? 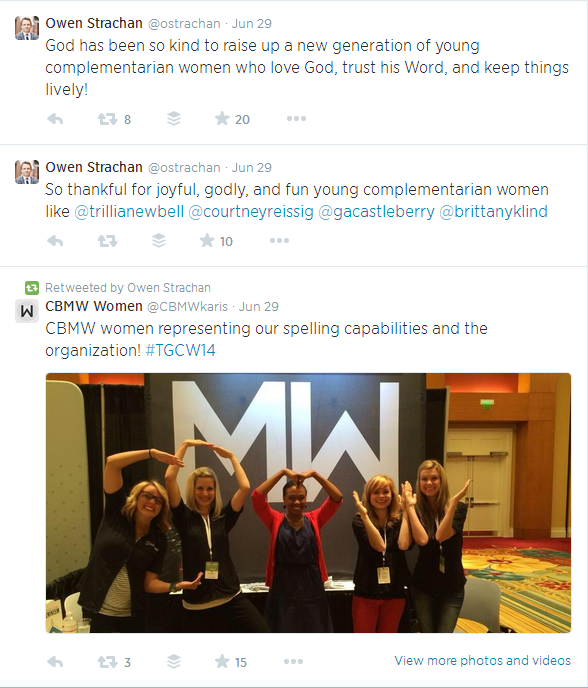 Notice here, we have FIVE women in the above tweet/picture.

Ok, for your math extra credit, please figure out what percentage of women represented their “spelling capabilities and the organization” in the above picture.

Isn’t that cute? Women were allowed to spell out CBMW, but when it comes to running the organization alongside men in the CBMW organization, we do not see any representation of women on the board.

Women represent 0% of the voices at the CBMW board. Maybe the men don’t want women to interpret their biblical roles?

I do want to point out that there are 26 members on the CBMW council, 6 of whom are female. I did my math and that means there are 77% male.