How do we make sense of what God allows in our lives?  Are we responsible for our own outcomes or is God? How does this fit in with abuse?

Someone sent me a tweet yesterday and I cannot get it out of mind.  As you might guess, what comes in my mind often becomes a post.  Interestingly, as my mind was on this topic, I started seeing it all over the place.

I need help understanding about God and what He allows or allowed, both good and negative outcomes. This may be my own personal issue in not fully understanding scripture.  All I know is when I read some of these tweets, sometimes they don’t bother me.  Other times, I cringe inside.

Sometimes these phrases cause me to question my knowledge of scripture, my faith, and all I know is I end up feeling like a lowly worm that can never measure up. The reality is I know that none of us can ever measure up and that is why we needed Christ’s death on the cross so that we can enter His gates with thanksgiving and praise.  (And there — I go back to singing again.)

Here is the first tweet that got this thought process rolling. It comes from Tony Miano who most likely tweeted this from an abortion mill where he was street evangelizing. (Actually, I wouldn’t really call it street evangelizing, but that’s a whole other topic and I don’t want to go there now.):

It appears The Lord has chosen to save a second child at the Tempe (AZ) @PPact praise god! #BAMH

Miano also sent this one on the same day:

Ok, so in the above tweets, Tony is saying that the Lord has chosen or allowed a second child to be saved from the abortion mill.  I should be happy, right?  But where does this take me?  It takes me to the logical conclusion that if the Lord allowed two children to be saved, then it also means that He allowed others to be killed.  That messes with my head and makes God an abuser, or even a murderer.

This is heavy stuff. Especially for someone who has endured abuse because then it means that I have to follow along with that logic that God allowed me to go through abuse, that it was His plan, He allowed it, and I need to suck it up. I can’t let my brain remain with this thought for long. It is just too painful.

Moving along . . . I remembered another tweet from Tony not too long ago and thought he had worded it in a funny way, so I dug it up.  Sure enough, he used the same “God allowed” as I had remembered:

When does God get the credit and when does Miano get the credit?  In both of these tweets, Miano gives God the credit for good. Interestingly, his buddy and my former pastor, Chuck O’Neal, tweeted this about the saving babies at abortion clinics:

I then searched and found some more “God allowed” or “Lord allowed” tweets.  Here’s one:

Whoa, I thought Pat Robertson was the one who said stuff like that. Here we have “God allowed” killing of innocent people because of sin. More heavy stuff.

@NotKennyRogers Note that at the very moment God allowed bacon, the gospel spread to all peoples.

Back to more serious tweets, here’s one from Pastor Tim Keller:

If God allowed a perfect man to suffer terribly, why should we think that something like that could never happen to us? — Timothy Keller (@timkellernyc) March 30, 2014

This one works for me. I don’t expect my life or anyone’s life to be rosy. Scripture talks about personal trials all over the place.  Here another one from a pastor I’m unfamiliar with, Andy Thompson. It’s encouraging and I like it:

The Lord allowed u to break free from the chains of your past. U might not survive it twice. He the Son sees free is free indeed. #stayfree — Pastor Andy Thompson (@PastorAndyWOCC) May 24, 2013

Now the following one is another tough one. Someone’s obviously struggling with the same kind of questions I’ve brought up in this tweet:

Explain me this If a man dies because of hunger, did God allowed it. Is it his fate to die?” Or If a person gets sick, is it because of God?

I found the following “God allows” tweet disturbing. I need to give more of the background so you can see it in context. Janet Mefferd sent out a tweet which I thought was not only funny, but truthful about Mark Driscoll:

Say what?  He has found encouragement that God allows false teachers to remain because God is testing us to know whether we love the Lord with all our heart?   He then scolded Janet for speaking up. So this means just shut up about abuse? 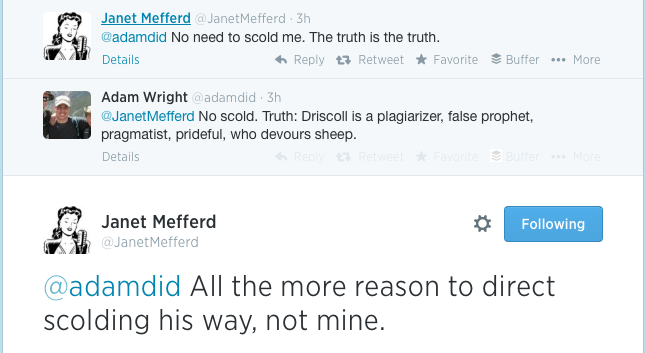 Do you see this battle we face within our own?  I guess in Adam’s world (who comments in a tweet above), we should just be thankful for abuse because it causes us to get closer to God and tests our faith.  To heck with all of those blind sheep who haven’t been able to see the truth because they’ve been drinking purple KoolAid. People like Mefferd and all other bloggers who call out wolves in sheep’s clothing should just shut up and be thankful?  I think not.

Do you see how this kind of God-allowed thinking can be used in church leadership to excuse abuse or silence abuse? Pastors can label a church sex abuse situation as a God-allowed incident and since God allowed it, then it’s a church issue and the sin remains in the church – – no need to report to authorities- – it’s all under control. God’s got this one. He knows. He’s in control. He allowed it.

Or . . .since God allowed it, He’s using it to test our faith to see if we really love Him with all of our heart.

And what happens to the perpetrator when this line of thinking is in place?

This stuff makes me scream.

149 thoughts on “Trying to Make Sense of What God Allows: Good and Evil”