A three-part series of opinion and research/resource articles by “brad/futuristguy” on the recent Christianity Today interview with Saeed Abedini:

The way I see it, Mr. Abedini explained away facts about his conviction on misdemeanor domestic assault charges in 2007. He said, “I think the court made a mistake.” But, he also did not give enough detail to his response to Ms. Beaty’s question about the case to figure out what (specifically) he meant by that. He has more explaining to do on this account.

Here is what he said in the interview:

[CT] Can you talk about the misdemeanor domestic assault charge in 2007? You pled guilty to that, and that suggests there was at least one instance of marital abuse.

[Saeed Abedini] I believe courts can make mistakes too. They are not God; they can make a mistake. I talked with Franklin Graham. He asked me to keep silent and not say anything about anyone. Graham encouraged me, “Let other people defend you.” I think the court made a mistake, and I didn’t know that I’d been guilty until three weeks ago. I didn’t know that I got a sentence of 90 days in court until three weeks ago. No one told me.

Consider the Court Register of Actions

Here is a screenshot of the case Register of Actions for Mr. Abedini’s court case. The register is a public record. [Click image to see a full-screen version.] 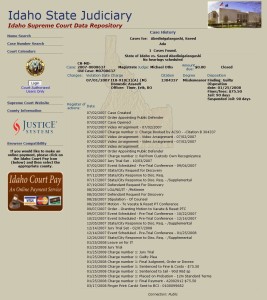 [If you prefer to find the court case page yourself to confirm the content, here is a step-by-step procedure that I first posted on February 1, 2016, and later as a section in the resource bibliography on the Abedinis’ situation.]

I personally took the above screen capture on February 2, 2016. This same shot was posted in a Spiritual Sounding Board article that same day. An earlier version of the same register, but with a wider right-hand margin, was posted on The Wartburg Watch on January 31, 2016 – the same day I took that screencapture. To my knowledge, these were the first screenshots of the court case ROA (Register of Actions) posted online.

Prior to the ROA screenshot posting on January 31st, details of the case were mostly speculation, though a few pieces of information had been published in an article by the Idaho Statesman on January 28, 2016. Quote:

In 2007, Saeed pleaded guilty to misdemeanor domestic assault in Ada County Magistrate Court. He was sentenced to 90 days in jail, which was suspended, and placed on probation for a year, according to online Idaho court records. The case file was not immediately available for review.

Examine the details on the court ROA. The criminal charge of misdemeanor domestic assault was filed on July 1, 2007. The case was created the next day. There are additional entries for July, August, September, October, and December of 2007. Disposition of the case occurred on January 25, 2008. Fingerprint cards were sent in March of 2008 So, the entire court case from initial citation to final disposition was seven full months.

However, Mr. Abedini claims in the Christianity Today interview that “I didn’t know that I’d been guilty until three weeks ago. I didn’t know that I got a sentence of 90 days in court until three weeks ago. No one told me.” Presumably by “three weeks ago,” that puts the date of his being told he’d been guilty and received a 90-day sentence at the first week of April, since the interview appeared online on April 24, 2016. So, doesn’t that mean Mr. Abedini is claiming:

A February 4, 2016, article by John Sowell in the Idaho Statesman provided some details from the court records themselves – not just the register of actions: “Abedini domestic violence incident in 2007 triggered by laptop argument.” You should read the entire article. Here are some key quotes:

Last week, the Idaho Statesman reported that Saeed pleaded guilty to domestic battery following a July 2007 incident at the couple’s West Boise home. The Statesman this week obtained a copy of the incident report from the Boise Police Department, following a public records request.

It reveals that Saeed Abedini got into an argument with his wife and shoved her several times during an incident at the couple’s West Boise home on July 1, 2007.

The argument came while Saeed, then 27, was speaking with family members. Naghmeh, then 30, got upset at something he told his family and tried to close the laptop computer he was using to talk with them, Saeed told police.

A description of the argument was redacted in the copy of the report provided to the newspaper.

[… Four paragraphs of description of events, as reported to police officer Erik Tiner by Naghmeh and by Saeed.]

When [police officer Erik] Tiner asked what she wanted done, Naghmeh told him that “she wanted him to go to jail for domestic battery.” She then signed a criminal citation.

Saeed was arrested that day and taken to the Ada County Jail. Following a video arraignment the following day, he was released on his own recognizance.

During court proceedings, Saeed was assisted by an interpreter who spoke Farsi, the Persian language of Iran.

Saeed initially pleaded not guilty to the misdemeanor charge, but changed his plea to guilty on Jan. 25, 2008, according to court records. He was given a suspended 90-day jail sentence and fined $76. He was placed on probation for a year by Ada County Magistrate Michael Oths.

Saeed was also ordered to attend eight hours of sessions on anger management. He completed that requirement before entering his guilty plea, records show.

Neither Saeed nor Naghmeh responded to requests for comment for this story.

So, Mr. Abedini had an interpreter, according to court records obtained by the Idaho Statesman. However, adding to the apparent claims I noted earlier:

@XianAtty posted a series of tweets related to the Christianity Today interview with Saeed Abedini. To summarize, according to these tweets of April 26 through April 29, Saeed Abedini:

@XianAtty called on Christianity Today to investigate the matter (see Tweet #2-3 below), but there has been no response yet.

Here are the tweets I drew upon for that list. They are found on several different Twitter threads. [There are two “galleries” of three images each. Click on a gallery to display the first tweet in the row full screen, and use arrows at left and right of the screen to navigate through the row.]

What do you make of those challenges to Mr. Abedini’s statements, posted by someone who presents himself/herself as a Christian attorney?

I find another issue beyond whether Mr. Abedini is being truthful. For me, this seems to mean that Christianity Today allowed Mr. Abedini to put forth serious but unsubstantiated claims about his 2007 guilty plea that may include collusion, fraud, failure to ensure defendant rights, and lawyer malpractice – evidently without any major editorial processing or push-back, other than merely asking an open-ended question to “talk about the misdemeanor domestic assault charge.”

How does this qualify as responsible journalism?

Did it make a complicated situation more clear for their readers, or more cloudy?

If it did create additional problems, how should CT rectify this lapse? What could/should readers do if CT lets the implications stand as-is?

Challenging Christianity Today’s Interview with Saeed Abedini – Part 1 of 3: Introduction, and He Gave No “Answer” to the Allegations.

Resource Bibliography on the Saeed and Naghmeh Abedini Situation.

11 thoughts on “Challenging Christianity Today’s Interview with Saeed Abedini – Part 2 of 3: He Raised Unchallenged Accusations About His 2007 Domestic Assault Case.”