Last Sunday, I had the privilege of speaking at a Free Thinkers group. Privilege, some might ask? You bet. I will take any opportunity afforded to share the truth, set the record straight, and especially let people know that I, as a Christian, am displeased by the state of the Body of Christ when it comes to abuse and our response to abuse.

I feel I have a connection with many atheists. You see, when my defamation lawsuit went viral, I received over 500 emails of support. Many of those emails were sent by people who were harmed in the church, and then became atheist. This was originally a surprise to me, and  it saddened me. So many of these folks get spiritual abuse. They see the dysfunction and hypocrisy of celebrity pastors and leaders. Many of them are upset by what they see, and rightly so. If only those within the Body of Christ would get worked up about it!

It all started when I was in my Environmental Science class at school. My professor had mentioned something about politics and I spoke with him after class. To make a long story short, we got on the subject of thought reform and my understanding of cults. He made note of that. He also made note of my comments during class about quiverfull during the population lecture. He mentioned that his book club had read Kathryn Joyce’s book on the Quiverfull Movement and asked if I’d like to the Free Thinkerss book club he belongs to. He said the group might be interested in hearing about some of my experiences. From that meeting led to the invitation to the Free Thinker’s monthly meeting in our area. I accepted on the spot.

Now fast forward to Sunday. After some user-error technical issues, the presentation began by sharing the first part of this Young Turk’s video. It shows KATU’s original interview with me about my pastor suing me. This was the original news report which went viral.

I then shared about my personal background, abusive childhood, religious background, how our family got started at Beaverton Grace Bible Church. Screenshots from the blog were shown. I explained different legalistic teachings from Chuck O’Neal, my suing ex-pastor. The $500,000 defamation lawsuit was discussed and its aftermath. I shared how the lawsuit experience made my blog very public, and realized that many others had been harmed at their churches, too.

I highlighted some of the big names that have been exposed here at SSB, as well as personal stories. I shared about my dream team, Brad, Kathi, and Billie, who contribute publicly and behind the scenes and make it possible for me to keep this blog running while I’m at school full time.

Here are a few slides from the presentation: 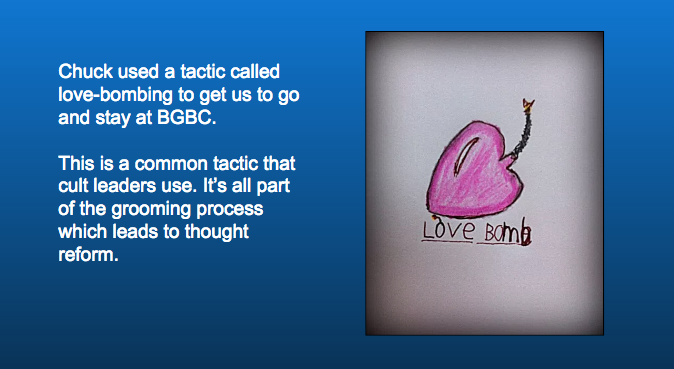 All in all, I felt the presentation went well. I think that Christians sometimes view atheists as scary. Of course, they are not. Here are a few thoughts and lessons I jotted down thinking about the experience and meeting the people.

I hope that by writing this post that someone might be challenged to remove a negative stigma that some in Christianity put on atheists. I do not believe that Jesus would have rejected those of different faiths.

If you happened to have attended the meeting and are seeing this post, I’d welcome your feedback, both positive and negative. I greatly appreciated the experience and enjoyed meeting many of you!

There was a brother and sister who attended to meeting. I spoke with the brother afterwards. If you happen to be reading this article, I’m afraid that you may not have gotten my phone number correctly. Please feel free to contact me at spiritualsb@gmail.com. I would really like to connect with you and hear your story.