My last post was about the new article written by former pastor, Tullian Tchividjian – The Freedom in Losing It All – published at the site, ExPastors.com. (It isn’t clear yet from a preliminary ExPastors.com article or otherwise whether this publication came about at their invitation or at Tullian Tchividjian’s request to post.) As the day went on, I watched the comments and noted a familiar pattern: The blog moderators were not comfortable with comments questioning Tullian Tchividjian’s character or their integrity. They started removing comments, and posted an explanation that the comments were not meeting the blog’s intended purpose.

When they started implementing that, the comment total was at 121. As of this morning (September 30th), it appears that a total of 4 comments were outright deleted, and 2 comments are still “awaiting moderation,” so the comment count total is 117.

What is the purpose of ExPastors.com?

We seek to be a place of help, healing and hope for expastors, pastors, and church leaders. We do this by hearing their stories, connecting them with people and resources, and focusing on spiritual, physical, mental, and emotional health. (Link.)

Now, obviously my blog has an intended purpose. The purpose of my blog is to expose abuse within Christian churches/organizations, and to supply a safe place for survivors of those hurt by abuse. I also have posting guidelines and will remove comments if someone is defending an abuser or if their comments make this place feel unsafe for survivors to participate.

So, that leads me to the obvious conclusion that ExPastors.com is doing the same, but the difference here is that Tullian Tchividjian has now become the victim.

Tullian Tchividjian was the perpetrator and the liar who left a trail of destruction in his wake. This celebrity pastor whose ministry collapsed because of lies and sexual sins, and now … he has reportedly turned his life around? Really????

In contributing to ExPastors.com, Tullian Tchividjian has been graced with a platform on a silver platter to share the depths of his despair, even to the point of contemplating suicide, to his large and ever-faithful following and to the regular audience there.

Tullian is a perfect poster boy for this site. What more could they want than a high-profile celebrity pastor whose tragic collapse has now been beautifully restored?

But wait … has it really? How are we to know? Are we to believe the man who publicly confessed that he had an affair only after finding out about his wife’s affair? How convenient of him to leave out that he had previously had sex with another woman who was not his wife. And how hateful for Tullian Tchividjian to blame his wife for his more recent sexual immorality. And then when Pastor Kevin Labby took him under his wing at Willow Creek Presbyterian Church in Winter Springs, Florida, Tullian Tchividjian also failed to disclose the full extent of his sexual immorality. This is not a man who has a history of telling the truth. Are we to assume that a claim of spiritual restoration means he is now telling the truth? Because he claims God has done this work, does that mean we are exempt from fact checking?

If you aren’t convinced of the opinion that he lies, see it for yourself by reading the extensive chronology, posts, and initial analysis in this Resource Bibliography. (That resource page is due for expansion and updating soon.) Patterns of deceit, failure to be forthcoming with the truth, blame-shifting, etc., seem clear enough.

Meanwhile, it’s important to note that the goal of ExPastors.com is apparently primarily to deal with ex-pastors, not any residual fallout caused by them (i.e., any people they may have victimized), nor to verify first if ex-pastors who contribute material on their site are being truthful.

So, on Twitter, I challenged the Executive Director, Greg Atkinson, during his conversation thread with my long-time Twitter friend, Andrew, who rightly is concerned about victims. Here are screenshots of that thread: 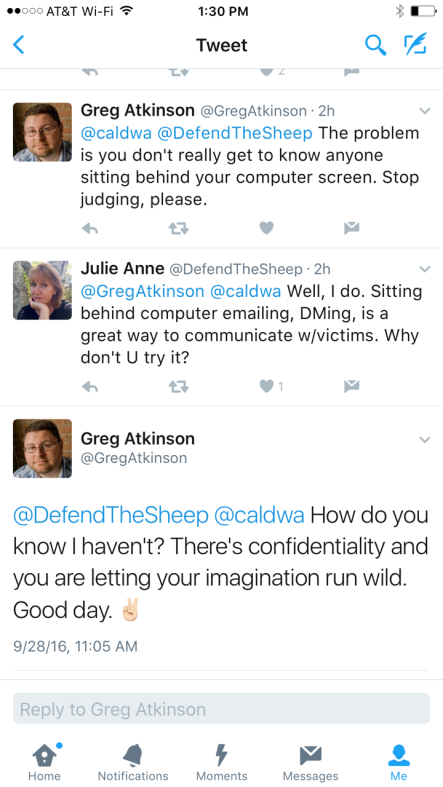 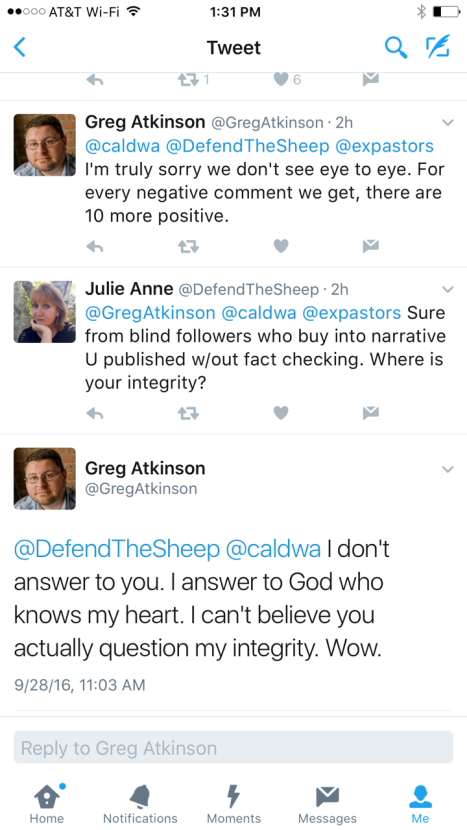 And then I, too, was blocked.

Our exchange was … interesting, yet it aligns with their statement of What We Believe:

Why do we believe this? Because we’re confident that God is not done with you yet.

Notice this important part: “[W]e believe the expastor should, once again, become reintegrated back into ministry, into a place where they are fulfilling their call.” Yikes. Imagine those harmed by Mr. Tchividjian who are now reading this.

Sadly, what often happens when news of a fallen celebrity pastor makes a comeback, they are given more media attention. Sure enough, Jonathan Merritt at Religion News Service (RNS) got hold of the story and decided to extend Tchvidjian’s platform to even a larger audience. RNS posted Billy Graham’s grandson on his near suicide and whether he’s planning a comeback on September 29th.

As a sidenote, I found out later that this was not Jonathan Merritt’s first time writing about Tullian Tchividjian. He has done at least two other personal interview-type articles:

Back to the article posted yesterday about Billy Graham’s grandson … Good grief, my blood pressure rose as I considered the implications of this – – – scores and scores of people getting to read about their hero making a wonderful spiritual comeback – – – based on what? Just Tullian Tchividjian’s word?

So, I responded to the tweet announcing this interview article, and here’s that thread:

.@JonathanMerritt @RNS @TullianT Jonathan, did you think of contacting his ex-wife and those he hurt to vouch for his new spiritual state?

I did, and it's not measuring up.

Yes, that’s right. It took me all of seconds to contact key people directly harmed by Tullian Tchividjian to see if he had changed, to see if he has made things right with them.

So, what we have going on here is a masterful show of supposed spiritual renewal by ex-pastor Tullian Tchividjian, with no fruit evidenced toward the above people he harmed, or by other I also contacted.

So, sadly, now the Tullian Tchividjian fans are coming out in droves to read their hero’s words. But ExPastors.com and Jonathan Merritt failed to do due diligence when they allowed Tullian Tchividjian to uncritically report his own narrative. Someone who is truly repentant wouldn’t be taking center stage again without making sure all of his victims were okay with it. Tullian Tchividjian’s victims don’t matter to him. They are just excess baggage that gets in his way.

Wasn’t Tchividjian masterful?  He appealed to an audience who wanted to hear his side, and what a perfect setup to gain back trust from his fan base to purchase his possible upcoming book.

Edited 09-30-2016 to clarify that it is not yet known whether the ExPastors.com article came about at the invitation of ExPastors.com or from initiation by Tullian Tchividjian.

231 thoughts on “Is This Tullian Tchividjian’s Spiritual Comeback Tour?”