Pastor Dan Kellogg of Gold Creek Community Church invited Pastor Mark Driscoll, former pastor of Mars Hill churches, to preach at his Seattle-area church yesterday. There was also a protest outside during the service by about a dozen former Mars Hill church members.

A leaflet distributed by demonstrators was entitled “Mark Driscoll – Unfit for any Pulpit”. It said: “We believe restoration is possible and we pray regularly for Mark. Putting Mark back in the pulpit as a leader in the Church now is not biblical. It is neither loving to him or to those with whom he has not reconciled.” (Source: Christianity Today: Mark Driscoll gets standing ovation from Seattle church, but protesters picket service)

Here is a link to the pdf of the leaftlet which was distributed (special thanks to Warren Throckmorton who has done a stellar job covering the Mark Driscoll saga). Below is a screen shot of the top portion of the leaflet: 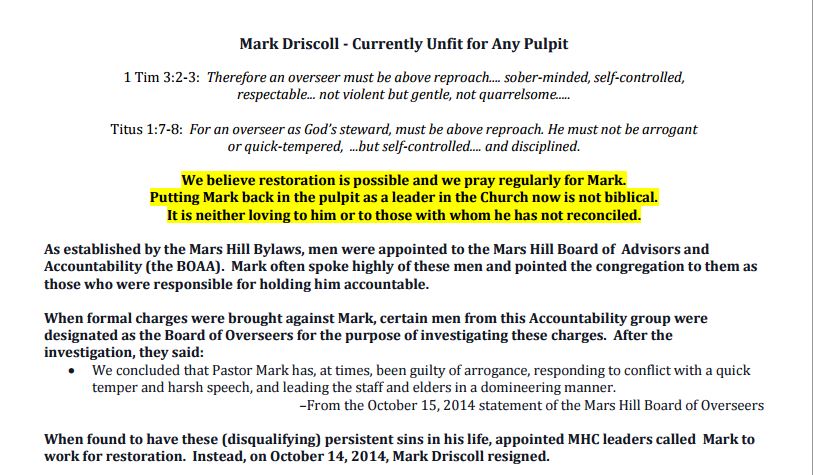 Before the service, Pastor Dan Kellogg released a blog article after he became aware that there would be protestors. Here are some notable quotes:

Before Driscoll took the stage, Pastor Dan Kellogg gave an introduction. I have transcribed it as follows:

Before he comes out, though, I want to recognize three types of people that are sitting in the service here today. The first type of people … are people that just clapped that absolutely love Mark, many of them have found Christ in his ministry. And they’re here, they are thankful, they are excited about hearing from Mark again.

There are some who are here that have strong opinions against Mark. And you’re here. Thank you for being here. Many of you have made some of those opinions based on gossip – on somebody else’s … opinion of Mark. That’s not been fair to Mark. I believe he’s been unfairly treated by former staff people and by the media. And I want to support Mark and his family, especially during this time. [Chokes up.]

Some of you don’t know who Mark is. That’s a whole bunch of you – you go, “Who’s Mark? What are we talking about? What’s going on?” We’re glad you’re here. We just want you to have fun. So no matter what your opinion is today, I want you to be open to God’s Spirit today.  You don’t have to change your opinion. But you can hear from God today. We’re people of grace. If you don’t know this about us, Gold Creek is full of people of grace. We make room for anyone. We are not for everyone, but we’re for anyone, so I’m asking you to give Mark a warm welcome, a grace-filled welcome to the stage. Mark Driscoll, come up here.

You can hear Kellogg’s introduction and Driscoll’s sermon here:

Have I missed it? Have we seen where Mark Driscoll has publicly apologized for how he treated his staff and members? Has he taken responsibility for the allegations of plagiarism that were noted in several of his books? Who is holding Mark Driscoll accountable now? Why are the victims dismissed and labeled as gossips? Did Kellogg and his team interview any people who have spoken out publicly to hear their side or see if Driscoll has made amends?

One word about all of this: disturbing.