Many people are responding to the recent developments with Tullian Tchividjian being booted from The Gospel Coalition (TGC), ridiculous comments and vitriol by Joe Carter, public spokesman of The Gospel Coalition, TGC’s support of and even promotion of C.J. Mahaney in his ministry efforts, despite the fact that he and the family of churches he presided over are under investigation for covering up and failure to report sex abuse crimes.  One such person is Taylor Joy, a regular reader here.

Last night she shared with me a post she was going to put on her own blog and graciously gave me permission to post it here. Her voice resonates with mine. Let’s hear Taylor Joy share her thoughts on the matter.  ~Julie Anne

“Even with those constraints, however, let me be clear about this: I have never conspired to protect a child predator, and I also deny all the claims made against me in the civil suit.”

I read this exchange with Joe Carter of The Gospel Coalition, and my stomach sank. Carter seems completely oblivious to the culpability that members of TGC—heck, FOUNDERS of TGC!!!–have towards the Nate Morales abuse survivors.

Since he can’t seem to put the connections together, allow me to spell it out for him:

1) Carter claims that “TGC has no authority to get involved in matters at the local church level.”

REALLY? Well, apparently, Al Mohler, Mark Dever, Ligon Duncan, and others didn’t get that memo. They are the face of TGC, and they’ve publically supported C.J. Mahaney since the civil lawsuit began.

Even better–Mahaney sat on the front speakers’ row at the Together 4 the Gospel conference.  Sorry, when founding members of TGC support a local pastor–that’s an involvement!  Like it or not, Mr. Carter, The Gospel Coalition **members** have been actively endorsing C.J. Mahaney for a long time, except for Tullian Tchividjian.

Oh, whoopsie–Tchividjian is not a member anymore, is he?

If TGC has no authority over the cover-up of Nate Morales’ abuse, then why were Mohler et al allowed to use Together 4 the Gospel slogans and stationary to support C.J. Mahaney?  Or does TGC have no authority over T4G matters either?

2) Carter claims that many protestants want a hierarchical organization for the church, similar to Catholicism, but then claims that such a structure doesn’t exist, and that each church is autonomous.

Carter must have his head in the sand, because the Young, Restless, and Reformed movement promotes a different–but just as binding–type of authority structure: 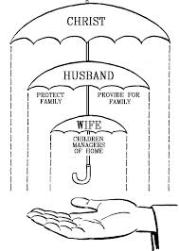 The Neo-Calvinist crowd cannot promote such stringent authoritarianism in the home and the church, then claim that TGC has nothing to apologize for.  If Mohler, Piper, and friends weren’t actively promoting that everyone submit to some figurehead above them, then parents of abused kids at Sovereign Grace wouldn’t have been programmed to submit to their pastor’s “authority,” and keep the abuse from the police.  You can’t program “authority” into the hearts and minds of the sheep, then disavow any responsibility once the wolves come in.

3) Carter claims that TGC has already spoken out against child sexual abuse, and that its critics are saying it “wasn’t enough.”  He refuses to make a statement in support of the victims, because he thinks critics will CONTINUE to say it wasn’t enough, unless TGC outright condemns Mahaney and Sovereign Grace Ministries.

Founding TGC members supported Mahaney, who was just revealed to be a bald-faced liar!!  That was a slap in the face to every victim who had to endure the cover-up, and submit to their pastoral “authority!!” These victims and their parents believed the falsehood that GOD HIMSELF set up this type of authority, and if they didn’t SUBMIT, they were disobeying GOD, and where do you think they GOT THAT IDEA???

So. No. Speaking out against the amorphous idea of child abuse in general is not enough.  It will never be enough.  Your organization has specific sins to repent of:

1) Supporting Mahaney vocally, and publically, despite multiple witnesses to a HUGE cover-up of sexual abuse.

2) Teaching unBiblical hierarchical authority structures for the church and home, and even going so far as to imply that if a church member disagrees with these authority structures, he or she may not be saved. This created such a culture of fear that few were willing to break with the authority, and go to the police.